some thoughts on puerh storage at home (1) 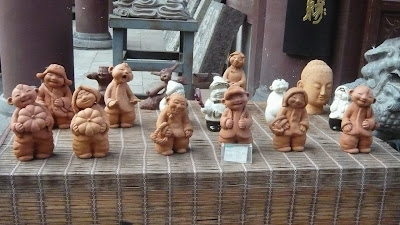 Can you believe that I have more than 100 blog drafts stored in my system, yet I could never finish them!

Generally speaking, I don't plan to store a lot of puerh at home (oh well people define "a lot" differently). But with shopping going on and when seeing teas that I really love, storage natural happens. I have friends whose homes dedicate more area to puerh than to people :-p But I don't think I'm heading there.

Although I've been interested in comparing "twins" or "triplets" of puerh for the contrast of different storage effects, my purpose was mainly to satisfy my own curiosity rather than gaining knowledge about actually storing puerh myself - I'm too lazy to do any environment control and New England is great for lazy people to store tea :-D

So I will first talk about why I don't store a lot of puerh at home, and then some random thoughts on optimal home storage of puerh.

I don't plan to store a lot of puerh at home, mainly for following reasons:

1. Many puerh professionals hold the opinion that home storage of puerh can never be as successful as puerh storage in professional warehouses. Generally I think this opinion is plausible. In home-storage, the hardest part might not be control of temperature or humidity (if one cares enough to strictly control them), but the density of tea storage (having as much tea as possible in each cubic meter of storage) and small proportion of edges (the smaller the volume, the larger the edge effects).

2. I believe aged puerh of decent quality and affordable prices would be more and more abundant in the years to come - I gave some explanation about why I think so in this post, but probably I'm more optimistic than many other people.

3. Even though buying old puerh is expensive, home storage is not cheap either, if considering money spent on buying a home (that must count, right?!) and tea ruined in storage (either due to owner's mistakes or due to factors out of human control). A puerh producer I know once commented that he believes currently nationwide (in China),  tea ruined in storage may amount to 60-80% of total puerh annual production. It's just a rough estimation, and probably not a pessimistic one. If you think 60%-80% sounds too much, just think of it in terms of decades. For puerh, one accident could end it completely.

Here are some of my thoughts on home storage of puerh.

1. People are more important than tea.
Oh well, I'm not sure if everybody agrees on it. But that's what I believe ;-) How is this related to puerh storage? I believe we should make our homes comfortable for people to live before considering how to make homes suitable for tea storage. And usually, when we take care of ourselves, a lot of tea storage problems are solved.

For example, for more than a dozen time, on both English language tea forums and Chinese tea forums, I've seen questions like this, "My house has a relative humidity of merely 30% during winter. What am I going to do about my tea storage?" Every time I see this question, the first thought in my mind is not about their tea, but - "How do these people live in a relative humidity of 30%?! Forget about the tea for a moment. Raise the humidity for yourself!" Maybe some people are accustom to this kind of humidity level, but not most people, I guess.

I've heard this message, "an environment livable for people is good for tea storage", from various puerh and Hei Cha professionals when they talked about home storage. And I like it. Not only that it makes sense to me, it's actually the easiest way too - taking care of your tea by taking care of yourself. Besides, in my observation, people's preference in tea is more or less associated with the environment they are familiar with. For example, coming from northern China (relatively dry), I have little tolerance of damp smell or flavor. On the other hand, Cantonese (in southern China next to the ocean) invented humid storage of puerh.

And of course, on top of the theory of "an environment livable for people is good for tea storage", common sense should be used - such as, unlike people, tea should stay in a dark place.

3. Generating a comfortable environment for both people and tea.

5. Site and size of storage