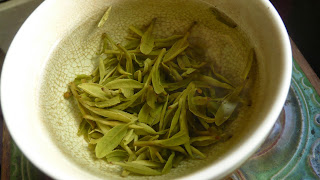 Other discussions on Long Jing can be found here.

The grading of Long Jing discussed here focuses on the national standards created by Chinese government and local standards by Long Jing farmers. Names of grades created by other organizations or individuals are not within the scope of this discussion.

The grading of Long Jing has changed a lot in the past a few decades.

In the old days (before 1995), Xi Hu Long Jing was classified into 13 grades, from Superior 1, Superior 2, Superior 3, Grade 1... to Grade 10. From Grade 1 to Grade 10, each grade was divided into 5 levels. So there were totally 13 grades and 53 levels. It was the official and universal way of grading when everything within the tea industry was state-owned. Each year, standard tea samples of all 53 levels were made available as benchmarks to grade Long Jing products collected from tea farmers and to guide the market of Long Jing. It was a nice and strict system. But 53 levels were just too many to be practical for a growing market of luxury tea in China (Long Jing has been the utmost of the luxury tea in China since Qing Dynasty, after being "advertised" by generations of emperors).

Back then, the highest grade Long Jing (higher than Grade 4, or any pre-Qingming tea) was not available in the market for ordinary people to buy. On the other hand, money was not the key to get the best tea. "Connections" were sometimes more important. There were many years when the whole family of us got pre-Qingming Long Jing along with Long Jing of medium grades from my aunt who worked in the Science and Technology Department of Hangzhou. Somehow their office got Long Jing "samples" every year - which basically meant a few kilos for everybody in the office, yet it was called "samples" :-p With our special connection through my aunt, we were lucky to enjoy nice and fresh tea each year. But the amount was small for each person and the tea was seen as very precious.

In 1980s, once my father went to Hangzhou, and bought some grade 4 long jing - the highest grade then available in market for ordinary people to buy. Up till these days he still says how much better the grade 4 Long Jing was than many so-called superior-grade Long Jing products in market today. I don't believe it's all because of his wrecked memory and nostalgia. Back then, everything went by the universal standards, and a grade 4 was a solid grade 4. Nowadays, many things could be called superior grade with a big price tag - I think I sound like a senior citizen now :-p

Today the aforementioned two systems of Long Jing grading are still in the textbooks of tea institutes and are still used in tea labs of research institutions. But most tea estates and tea companies are privately owned now. Producers and owners can grade their tea in any way they wish. In Long Jing, as well as in many other types of tea, I've seen a lot of grade 2 teas from certain producers that are much better than superior grades of some other producers. So I think nowadays the grading doesn't tell you much about the tea itself, but tells a lot about the standards of a producer/supplier/vendor.

Without a centralized, consistent grading system, nowadays a lot of farmers of long jing, bi luo chun and other green teas use harvest dates to grade their tea - although it's not a perfectly scientific standards, it's probably more objective. For approximate dates of tea harvest, here is a tea calendar. But please keep it in mind that the harvest dates vary from year to year, depending on weather conditions.
at 9:08 PM

Good to learn about the traditional grading system--I needed extra convincing that there really were that many levels. In my article on Lu'an Guapian it cites "分4级8等" which I take to mean "4 ranks of 8 grades each." Is that right, or have I got it backwards? Great to meet you in JP!

Hi Evan, it was a great pleasure to drink tea with you guys! And I'm still contemplating your brother Brandon's comments about tastes. Very interesting!
I've read from different books about the 4 grades and 8 levels of Lu An but haven't seen any detailed descriptions of the levels yet. I believe it's a total of 8 levels in the 4 grades. But usually Lu An from 内山(central producing region) and 外山 (surrounding regions) are graded separately, each has 4 grades. And the highest grade is a separate grade from the 4 grades. So it's a total of 1 + 2*4=9 grades. Sounds complicated. But I've never seen the grades used in the market. I guess the last time it was commonly used was at least 15-20 years ago.