Sichuan is the major supplying province of Tibetan tea. Starting from Qing dynasty, Tibetan tea from Sichuan is categorized into several grades. Ya Xi is the second highest grade. Since its leaves are younger and tender than regular grades of Tibetan tea, this tea is often brewed in a teapot, instead of boiled in a pot on stove top, in consumption. Without an exception, Tibetan tea of Ya Xi grade is made of tea leaves from above 1000m (3000 ft.) elevation with tedious processing. In traditional Tibetan society, Ya Xi grade was exclusively for royal families, Lamas and affluent merchants. 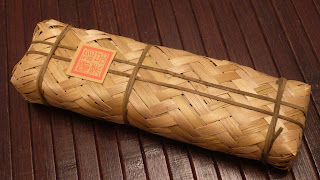 One has to dis-weave and tear open the bamboo encasing to take out the tea. Breaking such a nice package makes me feel seriously guilty! 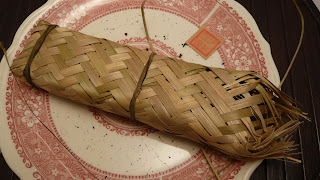 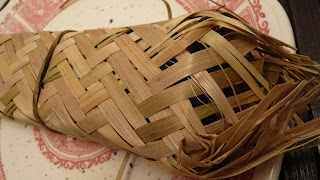 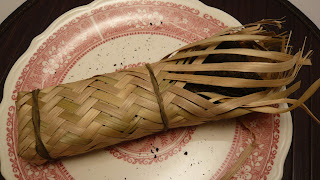 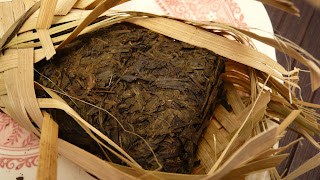 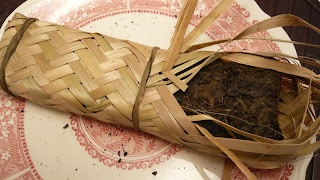 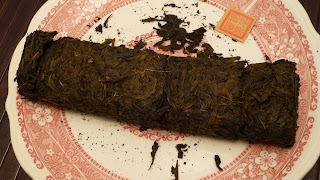 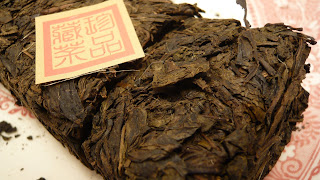 Based on my past experience with Tibetan Hei Cha, I have the impression that many of them are quite strong in taste, stronger than what they look like. So I used less tea than I would normally use for other Hei Cha or shu puerh, and brewed the tea in a 150ml small teapot, with 10 seconds infusions. However, I can imagine no real Tibetan would brew Hei Cha in a 150ml teapot. It's just a convenient volume for me. But maybe brewing in a larger pot is more suitable for this tea. 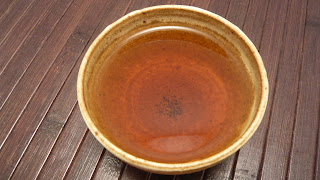 The flavor of this tea is somewhat earthy - it's not the soil type of earthiness found in some shu puerh, but rather the grassy type of earthiness. And there is some mushroom taste that's similar to what's found in some shu puerh. One thing I like very much about Hei Cha is, from time to time, you may find some features in it similar to certain features of shu puerh. But in Hei Cha, you will probably never get the stinky taste of over-fermentation, which is not rare in shu puerh. I think I also got some marine taste (seaweed taste) to a degree that I can enjoy (I dislike marine taste in other types of teas but like it in Hei Cha), as well as some grassy taste (which I think is less enjoyable than the grassy taste of some green teas). The aftertaste is not prominent. I feel the strength of most Hei Cha is not at aftertaste or multiple infusions, but at unique tastes.

The tea tastes stronger than indicated by the liquor color, and last for as many infusions as puerh. This surprised me a bit. Most Hei Cha I've had so far doesn't last for many infusions. They tend to give all they have in the first a few to several infusions. I guess it's mainly because most Hei Cha products are made of older leaves, even with significant amount of stems. This tea is made of much younger and tender leaves (however, still much older-looking than leaves of most other tea types). Besides, the geographic elevation of production must contribute to the durability of the leaves in brewing. 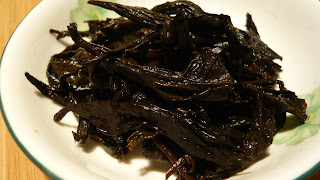 Not surprisingly, this tea mixes with milk very well. The more I drink Hei Cha, the more I tend to believe in the story that Englishmen might have got their milk+sugar style of tea brewing from Tibet, by way of Nepal and India.

Many Tibetan people like to brew a tea, store it in a thermos overnight, and enjoy it the next day. It's probably largely for the convenience. But some people also believe the tea improves by sitting overnight. I don't know if that is true. Since I often have a few different types of tea throughout a day, I usually save left-over tea leaves in the pots and brew them the next day or even a few days later. I did this for a few times on this Tibetan Hei Cha Ya Xi, and noticed I did like the latter infusions better for there was less grassy and earthy taste. But this could be simply because when the tea was weakened in latter infusions, it reached a favorable concentration for my taste buds.

Overall, I like its unique taste, the comfort the tea brings, and its convenience. Along with my beloved Fu Zhuan, this tea and a few other Hei Cha are good for large volume brewing to be saved for casual drinking of a whole day. Mixed with milk (and maybe sugar too), they also make great after-dinner beverage, especially after a heavy meal.

I had seen this review but didn't have the chance to really read until today. Very nice sounding tea. Now I really want to try it.

I have a question, 'Heicha' means Black tea. Does this include Puerhs or does Heicha has a different process than Shu or Sheng Puerhs?

Some books put puerh in "hei cha" category, and some books put hei cha in "puerh" category. But strictly speaking, puerh and hei cha are quite different in their processing. But the making of shu puerh was more or less inspired by the processing method of hei cha.

Leaving tea in thermos overnight might have similar effect to GABA when tea is being dried in nitrogen. I believe most of teas are getting better when deprived of oxigen while being brewed.