Discussion on Long Jing (2) is here. 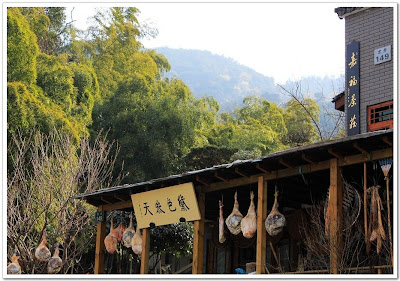 She sent me quite a few pictures but this is my favorite. I love those hams hung off the eaves! Hangzhou is one of the food paradises in China. It's so much easier to get tea shipped across the Pacific. But the ham and other food, I can only dream of them.

Long Jing literally means Dragonwell - a well whose name is Dragon. People in Hangzhou (where Dragonwell is located) often say, the title of "Long Jing" include 5 dragons. Here they are:

1. Dragonwell is the name of the above mentioned well. In ancient time, the well didn't dry up even in drought years. Therefore people believed there must be dragon (which is in charge of water in Chinese mythology) living in it. That's how the well gained its name.

2. Dragonwell is the name of a Buddhism temple, which was built in the 10th Century and located near the famous well. But the current temple is 90% newly rebuilt.

3. Dragonwell is the name of a village. Long Jing Village is a center of the famous Shi Feng (Lion Peak) Long Jing. Another famous center of Shi Feng Long Jing is Weng Jia Shan Village, also located on the Lion Peak Mountain.

4. Dragonwell is the name of tea tree cultivars - there are a few commonly used Long Jing cultivars.

5. Dragonwell is the name of the tea product made with traditional Long Jing processing method.

I think the above 3, 4 and 5 are very important when we talk about authenticity of a Long Jing.

For #3, the location is not necessarily Long Jing Village, but should be in or next to Lion Peak Mountain.

#5 is usually not a big problem, because it's easy to tell from the appearance of the tea product. But about tea processing, in recent years, there is rising concern about many producers using machine processing to replace traditional manual processing.

#4 is very often overlooked by tea drinkers pursuing authentic Long Jing, but I think it's often a bigger concern than #3 and #5. I believe genetics is the number 1 important factor that determines the taste of a tea. Traditionally, non-Dragonwell cultivars have been used to make Dragonwell-style tea, but they cannot be called Dragonwell or Long Jing, even if they are grown in Long Jing village.
at 11:04 AM

I still have yet to try a very top notch dragonwell! =/