Traditionally, as many other food stuff, tea was manually wrapped in a piece of paper. Folded by skillful hands of professionals, a thin piece of paper was turned into a well-secured package that could endure a lot of transportation and handling. The traditional way of packing tea was slightly more complicated than packaging for other food products, because tea is a more delicate product.

In traditional society, only upscale teas were packed in small portions. A typical portion was 4 liang, approximately 150 grams. The little 150g paper pack was where the name Baozhong is from. When the tea Baozhong was first in market, it used the paper wrapping which was then very popular in Fujian for upscale teas. Baozhong in Chinese means "wrapped product".

I always have sentimental feelings towards the traditional paper packs, in which I got snacks, candies, books and teas, without fancy paintings, without shiny plastic or metal. The paper was the most plain and simple kind, but the salesmen would make each pack in the most perfect shape and exactly the same size, all in seconds. It's a art that's not seen anymore.

Once I got this wonderful tea gift from Tead Off, who got it from a hundred-year-old tea shop in Bangkok. The tea, Qian Li Xiang (or Thousand Mile Aroma) is fantastic and is very hard to find even in Fujian, its production region. The tea came in a very neat, traditional paper pack! I spent a long time admiring the paper pack before I finally opened it. The little paper pack touched my heart deeply and brought me the warm memories of old days. It also amazes me to think that people have never stopped packing tea in this way in a hundred-year-old teashop in Bangkok, while this tradition has almost died in Wuyi, where all the oolongs were originally from.

Today, many people buy tea from thousand miles away instead of in the teashop at street corner. Paper packs are replaced by vacuumed cans, mylar bags or other modern style packs. I don't know why I was interested to learn how the traditional paper packs were made. Not that there is any use of it. To me, it's just interesting to know.

After talking with a few tea friends, I've learned that to make a traditional tea pack, two wood boxes are needed, one should fit right inside the other. I happened to have this set of four wood boxes which were common in American society in the old days. They can do a good enough job. 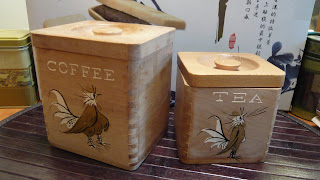 First, paper is wrapped around the smaller box. 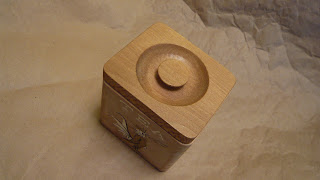 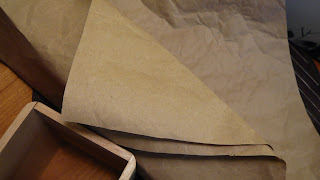 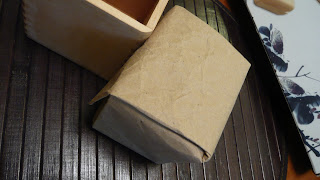 Then, the paper wrapped small box is set into the larger box. 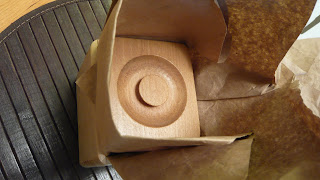 Next, the small box is carefully removed from the paper wrap. 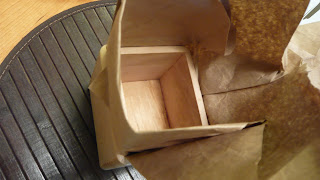 After the small box is removed, the paper wrap is filled with tea. To avoid any wasting in my clumsy action, I used rice instead. 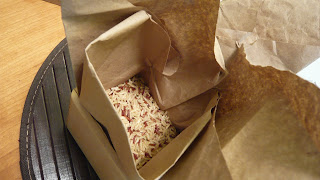 After the paper wrap is filled to the top, the paper is folded on the top. 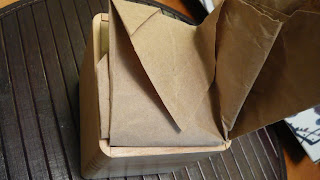 The lid of the wood box is used to press on the paper pack to make sure it's fully packed but not packed over the top. 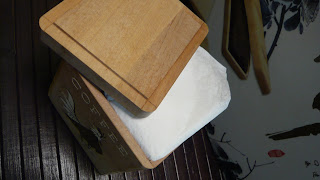 At the end, the paper pack is made and it's carefully taken out of the wooden box. 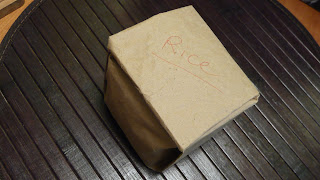 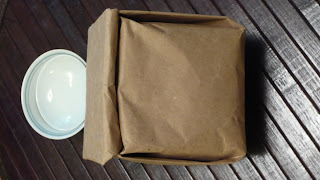 It took me more than half an hour to make this poor pack. But in hands of professionals, it would just seconds!
at 12:39 PM

The half hour of making the "poor" pack was worth it though. Nice pics and it's pretty clever. I feel I should be sitting down trying that myself right now. However, it's time for a bit of lunch and tea.

I love your blog posts by the way, they are informative, interesting and fun.

Thinking ahead to the December holidays, I could pack tea as gifts. Thank you for this wonderfully illustrated lesson.

Thanks for this post Gingko! It provided me with some of the answers I was looking for when I posted my piece called "paper wrapped tea in Tainan city" back in May!
http://blackdragonteabar.blogspot.com/2010/05/paper-wrapped-tea-in-tainan-city.html

Oh, Gingko, you are cheating. The man that wrapped your package uses nothing but the paper and the tea that has been weighed in a very old gram scale. He then uses the flat counter to put the paper down, pour in the tea, and, very neatly starts to fold up the paper into perfect packets that will usually not come undone unless you pick at it. And, as you say, it is all done in seconds as you wait and watch the teas that you purchased prepared in the same way.

I should mention that each package is then stamped with the tea's name using a chop.

Because Thailand still has a street culture with vendors everywhere, traditional methods of wrapping dry goods still exist. Of course in the more upscale shops the packaging is very slick. Bangkok is still a nice mix of the old and the new.

Ha! Without a wood box, it would be hard to make the pack so square!

The chop is very neat too! In Brett's blog about the Baozhong, the paper wrap has a nice chop too.

Nice post. Well what can I say is that these is an interesting and very informative topic on packaging materials near me