(Happy Moon Festival! I think it's like a Chinese Thanksgiving!)

I got this tea from my friend and my favorite TGY supplier. I have no idea how the tea tree variety is related to TGY, and he neither. But it's a local tradition in Fujian that people picked up wild tea leaves in the mountains during Qing Ming time (early April) and process it with very simple method. Therefore this tea is often called Qing Ming Tea. (However, Goden Osmanthus Oolong (Huang Jin Gui), a different tea, is sometimes called Qing Ming Tea too.)

One of the major purposes that people traditionally make this tea is for its health benefits. Local people believe wild tea has greater medical potency than cultivated varieties and like to use it as diet supplement to treat chronicle diseases, especially liver diseases. This has not been tested by modern science. I asked a few Fujian people and none of them knows why the tea is of medical benefits, although they all believe it. Some Chinese traditional medical theories take tea as a treatment for liver diseases. But I don't remember reading anything about wild tea has larger potency than cultivated tea.

Traditionally wild tea was made with very simple sun-drying and kill-green procedures, almost as simple as the procedure for raw puerh. Taste of traditional wild tea is by far not as delicate as Tie Guan Yin or other famous oolongs, often with some bitterness and astringency. Nowadays fewer and fewer local people pick up and make the wild tea. With increased living standards, many people turn to the "normal" fine tea. Besides, people in rural Fujian are busier and busier in other jobs that brings in a lot of money.

This year, after the March snow storm, Huang Jin Gui and a few other early harvest cultivars had very low or no yields. Without much tea to work on, the 70 years old Shi Fu in my friend's small factory couldn't bear with such idling in early spring. He said, Why not pick up some wild tea? We've got to have ourselves occupied with tea work, so that we will get thoroughly warmed up when new harvest of Tie Guan Yin arrives! That's how I got this wild tea carefully made by one of the most skillful Tie Guan Yin Shi Fu and his apprentices.

The dry tea leaves don't look as pretty as "normal" oolong leaves. Leaves are smaller than most other oolongs. 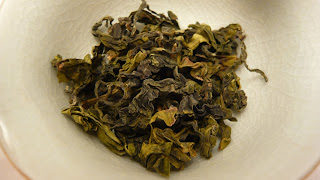 The initial taste was surprising. After hearing about the rough taste of traditional wild tea, I had not expect such fragrance and sweetness! The tea still has some wildness in it. It's still not as floral or elegant as Tie Guan Yin, Ben Shan or Huang Jin Gui. But it is quite pleasant. It still taste like a Fujian tea, but in some sense, it remotely resembles Taiwan oolong and raw puerh. 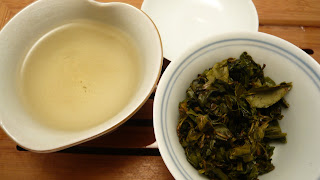 After several infusions, leaves expanded. It surprised me again that spent leaves look quite nice, which is in contrast to the raw looking of dry leaves. The most prominent character of this tea is the sweet aftertaste. I rarely see a oolong at this oxidation level with such strong sweet aftertaste. 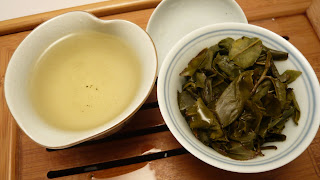 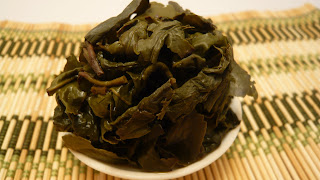 So, this tea is said to be healthy (which is not backed up with any "scientific explanations"). But what matters to me the most is always the taste. I love the unique taste of this tea. And of course it's a bonus if it's indeed healthy.

I would like to put it in the list of "Concept Tea" because it's something existing for hundreds or even thousands of years yet something we don't often see. Besides, it's not exactly the same as its wild tea antecedent. With careful processing, the wild tea becomes a fine beverage, yet it tastes untamed. It's interesting to think, What tastes are people seeking for in tea? Theoretically, the cultivated tea varieties reflect people's taste preferences over hundreds of years. But then, why sometimes a totally different wild taste can attract us so much?

Can this be a product line? I don't know yet if my friend and his Shi Fu will be making more next spring. But I think I will urge them to.

This tea will be included in our offers to tea bloggers, along with a few other unique teas.
at 9:22 AM

Fascinating, love this post. It's interesting because you place this tea in its historical context, and add an informative taste review.

The concept of a wild Oolong sounds very intriguing. Even if this one was slightly tamed..Definitely a tea I'd like to try.

Great post thank you,
This sounds like an amazing tea that I would love to try someday!

I love how even though the snow storm hurt some of the harvests tea production still went on producing something different and unique.

Hi Ian, I have enough of this tea to share with people but not that much to list it in store. Send me a message from the "offer to bloggers" link and I will send you some of this tea.