2010 Wild Oolong and its origin were documented here.

So this wild oolong from my favorite Tie Guan Yin producer has become an annual event for some tea friends and me. Back to this past May, we hadn't heard anything from the producer yet about the wild oolong, and asked them for it. The producer said, the wild oolong was made and was still being "rested". Then our question was, why would you need so much time to rest it (the wild oolong is usually produced in early April) and it's not even a heavily roasted tea? And the producer told us that they hoped the astringency in the tea would be reduced through resting.

Finally in June, I participated into a tea tasting event of this producer and got some samples of 2012 wild oolong. To me, tasting the wild oolong is one interesting thing. Something else that's equally interesting is seeing the "evolution" of this tea. Obviously, the producer has been experimenting the best way to process this tea. For most other oolongs, usually there are some "gold standards" and a producer would strives to get closer to the "gold standards". But for wild oolong, a tea with long-term informal processing among local people but without "industrial standards" for commercial processing, one could actually visualize many different ways of making it.

My past two months were in crazy transitions and till now I feel as if I've suffered from severe memory loss. For this tea, I actually had to track my correspondence with the producer 2 months ago to locate the pictures and verify my tasting memory was correct. So I would keep the verbal description short :-p

2. The taste is smoother than what I remembered for the past two years. Probably this is due to higher oxidation level than the past two years (somewhat revealed by the second picture below). I didn't taste much of astringency, but some other people in the some tasting mentioned astringency. This is probably because I do have higher tolerance of bitterness and astringency. Or probably because I brew my tea in a relatively milder way.

3. The dry leaves look quite dry and not shiny at all. But the expand leaves look surprisingly silky. This is what this tea has been like throughout these years. Generally speaking, I think silkiness of the leaves sometimes reflect how "organic" they are (depending on what "organic" means, but I mainly talk about how well the leaves were nurtured with organic nutrients by the soil or organic fertilization or both).

4. A close look at the expand leaves (the last picture below) shows that the leave are more "fibery" than most other oolongs from plantations. In this sense, the leaves look sort of "short of nutrients".

5. The above 3 and 4 seem to me interestingly paradoxical.

6. Last year, I mentioned 2011 wild oolong tasted somewhat dancong-like. This 2012 tea tastes even more dancong-like to me, with prominent honey aroma in the aftertaste. But it doesn't have as much uprising fragrance as dancong or some other oolongs. I think the strength of this tea is not at its aroma, but mainly at its unique taste and long sweet aftertaste. 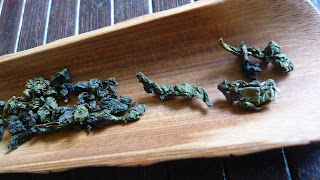 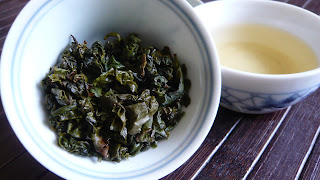 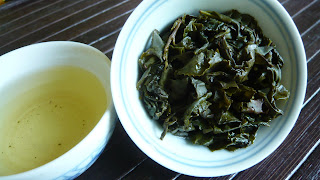 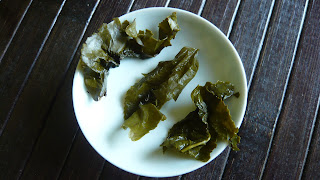 Thanks Israel! I miss you guys too! It feels good to be "back" :-D