Discussion on Long Jing (4a) is here.

To demonstrate a comparison between the two Long Jing cultivars (Long Jing #43 and Long Jing Jiu Keng Group cultivar), I took samples of similar grade (first day harvest) of the two cultivars from the same Da Fo Long Jing producer, and brew them side by side with the same method.

The brewing method I use here is:

I used this method for comparison because this is the most convenient method that will almost never cause accident. In this method, the water will not be too cool to induce the flavor from tea leaves. With gaiwan releases heat very fast, and with tea thrown in between two times of pouring water, the tea will not be "cooked" by hot water either. Even if the 1-2 minutes waiting time is a little shorter or longer, the impacts of temperature fluctuation will be buffered by the rest of the operation. That's a way to control the brewing without a thermometer. In this brewing, I used a scale for comparison purpose only. Usually you won't need a scale to tell how much tea is enough to put in the gaiwan. In this brewing, later I found out that I would prefer less than 1.5g of tea, probably 1.2g. But for people favoring heavier tastes, 1.5g would be fine.

Following is the comparison of the two cultivars.

Dry tea leaves. #43 on the left; Jiu Keng Group on the right. Overall, #43 leaves have greener color, and Jiu Keng Group leaves look a bit pale and a little yellowish. But the color alone is not enough to tell one from the other. There are many other factors that can affect dry leaf color. For example, age of the tea and processing parameters can both affect dry leaf color.

Leaf shapes are also different between the two cultivars. Overall the #43 leaves look more slender. But leaf shape can be affected by harvesting stage of the tea, so it's not a determining factor to judge on tea cultivar either.

Although the two teas are both first day harvests from the same producer, the first day harvest of Jiu Keng Group cultivar looks younger with more buds than the #43 cultivar. I've seen this phenomenon with almost all Long Jing producers I know. I think there are many reasons behind it. One of the reasons is, the Group culitvar is already late than #43 cultivar, and the price drops from day to day in the harvest period. So there is a motive for farmers to harvest on Group cultivar as soon as they can. 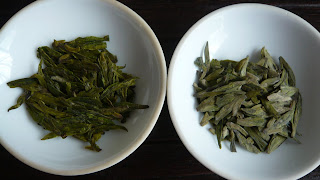 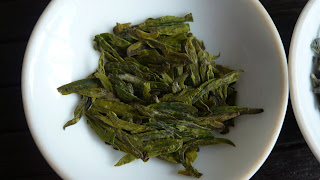 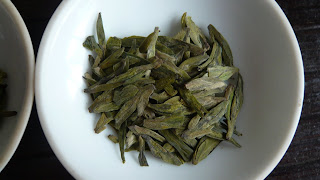 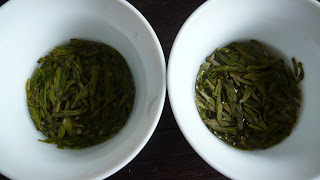 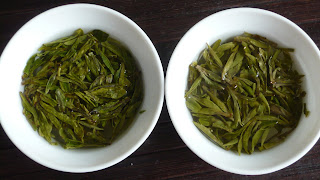 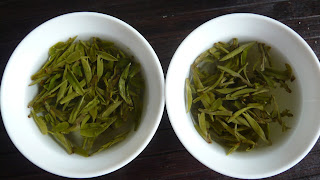 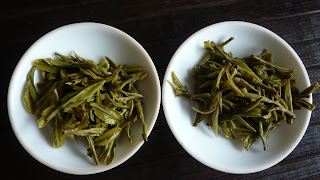 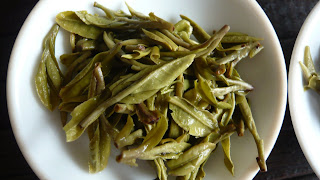 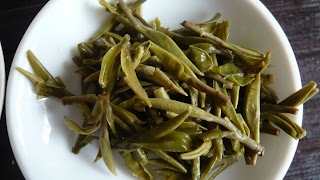 As I said in the last Long Jing discussion, it's not always possible to tell the culivar from tea product photos (for me, but it's much easier for experienced producers). The flavor differences between the two cultivars are easier to detect. Overall, #43 has a brighter, even floral aroma, while the Group cultivar has a deeper nutty flavor. Traditionally, Long Jing flavor has been described as "roasted chestnut flavor", which obviously fits the Group culitvar, but not exactly #43 cultivar. To me, the flavor of #43 is a little between "roasted chestnut" and green bean aroma. But overall, both cultivars have a light roasted flavor with sweet aftertaste that are typical of Long Jing.

Many seasoned Long Jing drinkers love the traditional cultivar and feel resentful that its production is shrinking in even the most traditional Long Jing regions. I have a lot of sympathy toward it and will keep supporting Xi Hu Long Jing products that use the tradtional cultivar. Meantime, in my personal experience, I've noticed that a lot of people would even prefer #43 for its sweeter, brighter taste. To me, it has a more spring-like taste than the traditional cultivar. In tea drinking, it's not always possible to say which is "the best", or which is better than which. But it's always interesting (sometimes even quite important) to know what cultivar it is and what flavor to expect from it.
at 11:27 AM

What a wealth of information!
Thank you for this post! I always learn something from your blog!

Hi Danielle, yeah, I usually translate qunti to "group", for easier English understanding. Jiu Keng is a cultivar of a mixture of genetically diverse tea plants. So we could call it qunti or "group", in contrast to "purer" cultivars artificially selected.