This is a rare tea, but not a novel tea. I would like to include it in Concept Tea because it serves as a typical example of dry-aged sheng, and there aren't many such examples. 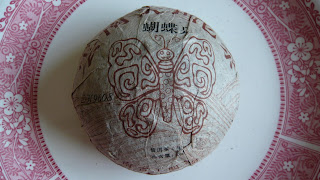 The tea was made for a Taiwanese merchant in 1996. Small amount was left in Yunnan, in dry storage.

Talking about dry or wet, average annual humidity (AAH) is a way of evaluation. New England region has an AAH of about 75% (rough estimation from this map), with AAH of Massachusetts slightly lower than 75%. AAH in the household is very hard to estimate, but I believe it's significantly lower than AAH in nature. I only have a very primitive hygrometer whose measurement is very hard to decipher. But I think it shows humidity of 50%-65% year around. AAHs of Guangzhou, Shanghai, Kunming and Hong Kong are 79%, 80%, 68% and 85% (data from a research on puerh storage conducted by Prof. Chen Wenpin of South China Agricultural University, published in The Proceedings of the 2nd International Conference of Yunnan Puerh, 2007). There is no official definition what is considered "dry storage". But generally speaking, people often refer to Kunming storage "dry storage". Guangzhou and Hong Kong are two important cities of puerh storage. I would usually call both of them Hong Kong storage (due to the significant status of Hong Kong in aging puerh), although nowadays a lot of "Hong Kong aged puerh" is actually aged somewhere in Guangdong, the Chinese province next to it. I will reserve the term "wet storage" to the type of storage using addtional artificial humidity. Besides, some people in Hong Kong or Guangdong may choose to use dehumidifier rigorously in monsoon seasons, and then the humidity is between dry storage and typical Hong Kong storage.

In China, there are some, but very few, discussions on storage in Northwest provinces. The AAH is 40% or below (think of Arizona with an average annual temperature of Montana). Some people are experimenting storing tea there after the the tea has spent some years in Guangzhou. Few people would consider such low humidity for long-term storage of puerh (unless the tea is expected to be "forever young").

So this tea falls in the range of dry storage. In China, this type of storage is often called "purely dry storage", with an emphasis on "pure" to distinguish it from "dryer" storage conducted in humid regions. But "purely dry" is still relative, and it's by far not "desert dry". If the tea spends more years in New England, I think it can still be called a purely dry-stored tea. I am interested in finding out what would happen to it in future years. But I am perfectly happy drinking it at its current stage. 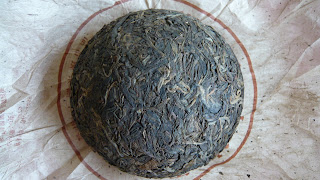 The leaves of this tea are admirable. I wonder leaves of such quality can still be seen at all in modern day Xia Guan products. 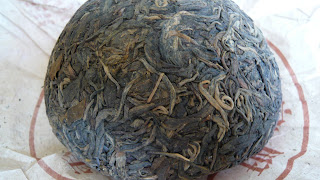 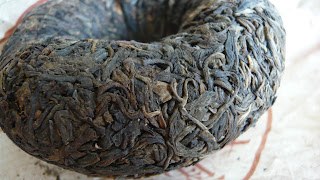 As most other products for Taiwan market, the tuo is made very neat. But still, not surprisingly, I found a cotton thread... so far no stones or barley shells found... 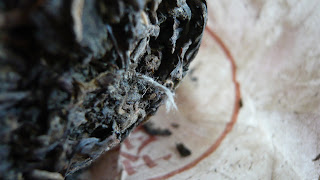 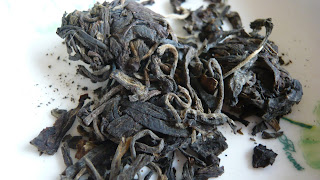 The texture of the liquor is smooth and soupy. The front taste is somewhat like shu puerh, minus all post-fermentation taste of shu. It has some "aroma of age", but definitely "aroma of DRY age". What’s most wonderful is its aftertaste, which is like a weak resonance of a typical sheng, bright aromatic, even a little floral, and very sweet. This lingering aftertaste made me elongate the interval between sips and cups, and taste the tea very, very slowly. In between the front taste and aftertaste, I think I’ve tasted something milky and buttery. It’s usually not a feature I find in puerh, either sheng or shu. So it’s possibly just my illusion. But also possibly that’s what the tea mean to be, since I’ve tasted milky flavor from Hei Cha products, which went through post-fermentation as puerh does. 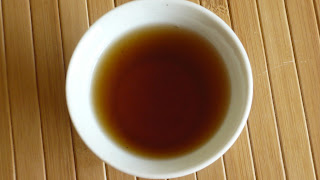 Lovely leaves... easily distinguishable from leaves of tea stored in higher humidity. As I've seen from some other dry-aged sheng, some well aged oolong and some heavily roasted Yan Cha, after all the years or roasting hours, eventually, all their spent leaves  look surprisingly alive and display some vibrant youth! 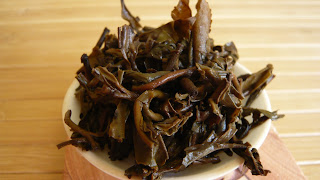 I’ve seen a lot of discussions on dry storage, Hong Kong storage and wet storage. But currently the missing link is dry-stored old sheng – there aren’t many of them. Many Chinese tea drinkers I know don’t like the taste of Hong Kong storage. But there must be a lot of people, whom I may not personally know, loving it too, especially in Hong Kong and Guangdong.  Currently, many people who don't like high-humid storage don’t have much dry-stored old sheng to choose either. Vast majority of dry-stored sheng in the market is only 5-8 years old. There are a lot of debates about dry storage and Hong Kong storage, because people have to hesitate and struggle between the two options. I believe in future 5-10 years, there will be more dry-stored older sheng (10-15 years, or older) available in the market or in hands of collectors. They will no longer be so rare, and very likely, will not be forbiddingly expensive. Once the direct comparison is widely available to most people, there is no need to debate. One can just compare and choose, without wondering how a tea will age in another number of years. It's just like, few people would argue which is better between green tea and white tea, because they are two different things, both easily accessible and ready to be selected by people of different preferences.

A puerh manufacturer in China (who stores his own tea in Kunming and in controlled dry storage in Guangdong) once said, people who love high humid storage will rarely change their taste, neither will people who love dry storage; so what's the point arguing which way is better? - His comment was in response to the current trend of Kunming-storage advocates rigorously denouncing Hong Kong storage. I don't think he said this just to show either side no offense or to be "politically correct". What he said is quite true.

I guess it's also possible that some people drink high humid storage for years and eventually find out dry storage is their "true love"; or the other way around - some people may drink dry storage for years and eventually wish they had tried high humid storage earlier. It's always important for each person to understand his own taste. But still, there is no need to argue which way is better.

I quite prefer dry storage myself, so I look forward to seeing how the cakes I have age and to see more dry aged sheng available on the market.

I look forward to try this Xia Butterfy. And thanks for some dry-wet borders. I was wondering about it many times...I have a theory that it is not only about moisture but also about microclimate and environment itself. I mean sometime the 75% of AAH can be the best and sometime it can be really dangerous (moulds and funguses).

I just noticed that there is a recent comment on steepster about this tea in which the writer believes this tea is "extremely wet stored".

Here is the product feedback page on steepster.
http://steepster.com/teas/life-in-teacup/18868-1996-xia-guan-butterfly-spring-tuo-sheng-250g

Here is my comment (which couldn't show up on steepster yet due to the recent system obstacles of steepster.com)

I can only guess the "white stuff" you are talking about is the crystallization on the surface of the tea. The formation of crystallization on the surface of old tea is significantly different from white mold. Even the crystallization is tiny and modest in my eyes, and probably one has to be very sensitive to feel the cake is "entirely covered" by it. This tea doesn't have a taste of wet storage. In fact, that's what some wet-stored-puerh lovers complain about this tea - they think the storage of this tea is too dry for their taste preference. To be honest, I thought it's pretty easy to distinguish a purely dry-stored tea (like this one) and an "extremely wet stored" tea. And I had thought the major complaint received by this tea would be its "too dry" taste.

The purpose of linking the comment here is not for argument though. I recently noticed this post is the most viewed post on my blog (I was surprised though haha...) So I thought readers probably would like to see various comments about this tea, and get a full spectrum of information.

I also want to mention that I've received quite a few comments that this tea is "too dry stored" for some tea drinkers' taste.

Although I'm quite confused by the exactly opposite comments of "extremely wet stored" and "too dry", I guess I can feel for the latter one better. But I guess the take home message is people are different, and could get extremely different impressions about one same tea. So whether or not one's tasting notes are helpful to another person all depends on the context and common tastes(or lack of them). And eventually it's up to each person to taste her own tea.

Somehow this post is the most read one in this blog. Hence I feel it's necessary to give an updated comment here:

I don't mind people giving truthful critics on my tea. In fact, I would love to hear them all whether or not I agree with each of them. Some of the negative comments we've got from tea friends were made out of the best intention and were the most helpful for us.

I have to admit that I didn't like the above-mentioned steepster comment made by Nick305 to begin with, because I found it self-righteous and arrogant. But disliking it didn't prevent me from sharing it with people who might be interested in this tea. It was most of my interest to be informative to tea drinkers.

I don't like censorship, even on my own blog. And my judgment can't replace your own judgment. Therefore I leave my previous comments and relevant links untouched. But I would like to point out that my previous comments were made without knowledge of what this person had done to Life in Teacup. If I had known, I wouldn't have given any response to his comments other than simply condemnation.

Thanks. Let's go back to more nice tea. Onward and upward!

-Gingko (manager of Life in Teacup)

This view may not be polite, let a pCheap Ceramic Teapotserson feel not so reasonable, there will be some smallAuthentic Purple Clay Teapot bumps in one's heart, uncomfortable but someone said so, and put ou