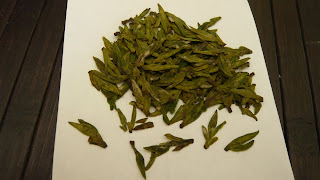 I will first go over the backgrounds of these two cultivars, and then in a later post, I will compare the two cultivars in terms of physical appearance and tastes. However, the purpose of comparison is not to demonstrate how to distinguish one from the other, since it's not always easy to do so by physical appearance. In fact, a comparison may instead demonstrate how similar they look. It's actually easier to detect their differences in taste than in appearance. That's why I believe it's important that producers, suppliers and retailers should always carry the information of cultivar for a Long Jing product.

Among Long Jing lovers, there have been a lot of debates on which cultivar is better, the traditional cultivar or #43 cultivar. But after all, they are genetically related and highly similar to each other. Besides, when it comes to taste, there are always personal preferences.

The early harvest feature of Long Jing #43 sometimes can backfire. For example, last year, when there was severe snow and ice storm in early to mid-March, harvest on Long Jing #43 was greatly impacted and production was reduced a lot. Meantime, the weather impacts on the traditional cultivar, Jiu Keng Group cultivar, were small to none, since the tea buds were not out yet during the snow and ice storms. In such a year with unusually cold March, #43 cultivar, which could bring more profit in other years, would cause great monetary loss for the farmers.

When I was a child, the aunt of mine who lived in Hangzhou was in charge of getting Long Jing for all of us. Every time she sent us many cans Long Jing, she would specify which cans were the highest quality for grandparents or as important gifts, which cans were for daily drink, and which cans were of decent quality. Usually the best tea was pre-Qingming (harvested before early April), and the rest was pre-Guyu (Guyu is around April 19th). Occasionally, in certain years, even the best tea was pre-Guyu, harvested after early April. And Aunt would tell us, "There is no pre-Qingming Long Jing this year, and pre-Guyu is as good as pre-Qingming of last year." Sometimes when there was no pre-Qingmign harvest, the tea could be even better than in other years, because of the cold weather and longer time allowed for tea leaves to accumulate nutrients.

Nowadays, with new cultivars (and probably more or less as a result of global warming), there is always pre-Qingming harvest. Even if cold weather delays tea harvest or damages tea buds, there is usually enough time for more tea buds to grow before early April. I think it's really nice that we can get new tea earlier with the new cultivar. But on the other hand, I think the traditional cultivar is very unique and its production should be maintained.

Your posts about cultivars are directly copied to my folder named "tea school -important to read!" Thank you!

Is it true that there is sold more fake long jing (from different areas and cultivars) then traditional?

Petr, thank you :D About fake long jing, I am sure there is a lot. Many provinces in China grow long jing culitvars, and much of their tea will be labeled "long jing" and sold somewhere. Within Zhejiang province, there are also non-long jing cultivars that are used to make products labeled as long jing.

I know this is an old post, and it's not directly relevant, but reading this inspired me to write my own post about cultivars and cultivar extinction.

In light of that post, these "fake" long jings, made from different cultivars, may actually be helping to preserve and protect the "authentic" long jing cultivars.

Unfortunately, sometimes things go to the bad direction whenever they can... Some non-longjing cultivars (largely considered fake) such as mentioned in discussion (5) are even found in the most authentic producing regions nowadays. This is very rare, as most farmers in geographic patent regions are very loyal to their cultivars. But as some non-longjing cultivars are harvested earlier (and therefore sold for more money), it can be a concern these fake cultivars may cause endangerment or even extinction of some traditional ones.

hi thank you for very insightful info on cultivars. It certainly is a absolutely awesome help into my just started journey into drinking Chinese tea.

Just so I can check with dragon well producer of what cultivar is their tea grown , what is "cultivar" known as in Chinese? As well as the traditional cultivar, let me know how do I express #43 cultivar properly in order to be understood :-)

hi I think I found the expression i needed to know . Many thanks look forward to reading more of your excellent blogs cheers

Thanks Luc. Let me know if I can provide further information :-)