Huang Shan Mao Feng is probably my favorite green tea. It tastes like high mountain mist, last for more infusions than most Chinese green teas, and it has the most handsome leaves!

This year, the first Huang Shan Mao Feng I've got is a very unique one. It's made with semi-wild tea leaves. These tea bushes were planted in the planned-economy era of China. Then in 1990s, with urbanization and development of (what I would call) capitalism, more and more farmers went to metropolitan China to work in large factories or as janitors, sanitation workers, waiters and in various other urban, low-income professions. Therefore, these tea bushes were abandoned for over ten years. They started to mingle with other wild trees and bushes. Then, in recent years, the fields were bought up by a small tea factory in Huang Shan (Yellow Mountain), and they started to take care of the tea bushes. Their way of taking care is merely manual management to maintain the shape of the tea bushes. There isn't much more that can be done. The fields are very much isolated from the outside world. The only road leading to the tea fields is barely 6 feet in width. The slopes are extremely steep, perfect for growth of tea but not for "modern" agriculture. There isn't any pesticide or artificially synthesized fertilizer applied to the tea bushes. Although the product is not certified organic, it is organic tea in real sense.

After a few experimenting years, this is the first year relatively large amount of teas is produced in these fields - roughly 15 lb. produced from the first harvest, and some more to come from later harvests in early and mid-April.

Here is a photo the tea factory sent to me about their semi-wild tea fields. It's my type of small heaven! 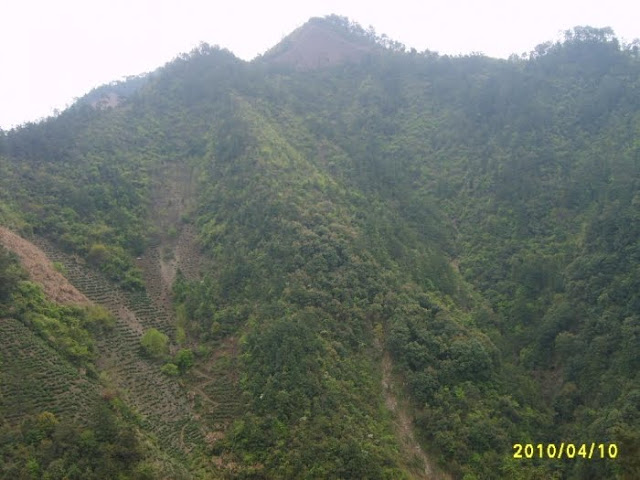 The ultimate evaluation of a tea is based on its flavor. In my opinion, the greatest difference between semi-wild tea and regular tea is richer flavor. For green tea, early spring is the best season (and the only season for many products). The earlier the harvest, the more refreshing flavor a tea has. Then in later harvests, flavor becomes heavier, but meantime, some bitter, astringent side tastes may build up too. The semi-wild tea has the pure taste of early spring, but it has richer flavor than other teas harvested at the same time.

Natural beauty of the dry leaves. 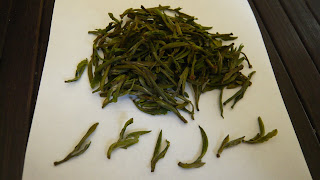 I always use a glass to brew Huang Shan Mao Feng. Can't miss the view of tea dance! 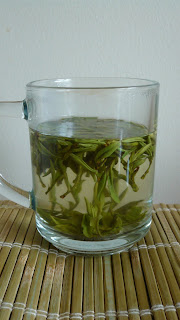 I love it when the leaves all "stand up" in the water like many little trees. 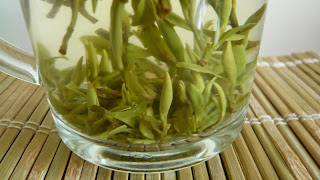 When most leaves sink to the bottom, the tea is ready for drinking. If you gently blow the water surface, you can "drive" away the suspending leaves. Many people would prefer using a gaiwan, to avoid any fight with the leaves. When using a gaiwan, I believe it's a good idea to leave the lid OFF most of the time.

I think I've got to get a glass gaiwan for green teas! 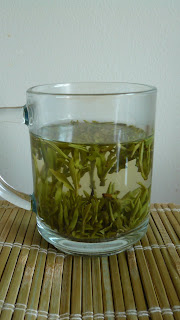 The tea has a light green bean / edema-me aroma. The first infusion doesn't feel as strong as some other teas. But the first 3-4 infusions are very consistent in flavor, and the refreshing aroma doesn't get weaker. As a thrifty-minded person, I re-infused this tea for many times. To other tea drinkers, I would recommend at least 5 infusions. This tea lasts more infusions than most other green teas I've seen.

To me, this is the most exciting time of Spring! 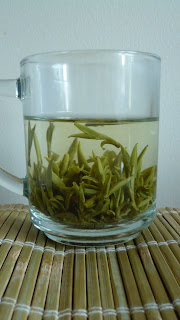 Semi-wild tea bushes/trees are rare, but are found in various tea production regions (such as Anhui, Fujian and Yunnan). Some of them will become completely wild and dissolve in the background of wild woods. Some of them may be reclaimed by tea farmers. I believe, what this small tea factory in Huang Shan has done, managing them at a natural level, is a best way to treat these semi-wild tea bushes.

The most celestial taste of tea often comes with some heavy topics. Drinking this tea, I can't help pondering on the tea agriculture and tea "industry", and all the impacts it receives from social changes.

Why were the tea field abandoned in 1990s? Obviously, tea farmers could earn more money as janitors and waiters in a large city! Today, the redemption of abandoned tea fields is a good sign. The tea is valued much more than it was in 1990s. But even up till today, tea farmers in Northern China generally make much less money than tea farmers of the "most famous" teas such as Xi Hu Long Jing, Tie Guan Yin and Wuyi Yan Cha. In Yellow Mountain regions, many doing-well farmers are organized by their villages or local factories. But many other tea farmers don't enjoy such organizations and constantly struggle between low sale price and what tea quality they can afford to produce.

In recent years, human labor becomes more and more expensive in China. A sign of this is many urban manufacturers of cheap products have gone bankruptcy, and more and more farmers go back to their home villages as rural income started to get higher than the low salary they can earn from the cities. I hope this means more tea fields will be used to produce higher quality teas, and the market rewards farmers better.
at 12:33 PM