what affects shelf life of a green tea (1) 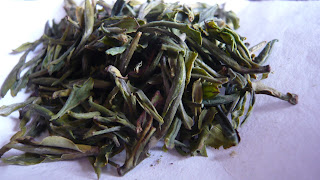 While waiting for the new green tea, I was finishing up some 2011 green teas. The one in the picture is a Huang Shan Mao Feng, 10 months after its production. It's still quite fresh and enjoyable. Usually when new tea arrives and when you taste a new year and a previous-year green tea side by side, the difference is big. But before that, a well-made, well-stored previous-year green tea can serve you nicely. I put "well-made" before "well-stored", because I believe among all factors affecting a green tea's shelf life, processing is the most important. So here is a list of all these factors, in a sequence of importance/significance in my mind.

When comparing a few puerh products, their quality/taste rank could be vastly different at two time points 10 years apart, or few years apart. This may even happen to some oolong products. But this doesn't happen to most green teas. Most green teas don't "age to become better". So usually a green tea must be well-made to still taste good after a year. However, when I mentioned well-made earlier, I was not just talking about the tea being made delicious when new. In green tea, it happens, from time to time, that a tea could taste nice and fresh when new, but deteriorate rather fast.

Once I got a sealed can of Long Jing from an aunt. I got it in late November of the production year, and the tea can was vacuum sealed. The tea leaves and buds look lovely and they were definitely from a very early harvest of that year. When I opened the can and start drinking the tea, I found the tea not superb but nice. But one or two months later, I found the taste of the tea significantly heavier and bitter. After a few more months, the bitterness got even stronger. I was quite frustrated and couldn't figure out why. I wondered if there was something wrong with the tea cultivar that I couldn't tell. I showed the tea to quite a few tea professionals, and all of them said the tea looked fine, authentic Long Jing #43 cultivar. But then, a few of them pointed out that the bitterness was most likely from the water content in the tea. Since the tea was vacuum sealed and then stored during the winter months in my dryly heated apartment, the most possible cause of the bitterness was not humid from the environment, but water content in the tea.

Typically, fresh leaves of green tea are pan-fried to have their oxidation enzymes killed. In the process, inevitably, the leaves will lose some aromas and flavor, while some new aromas and flavors will be generated. Besides, when the leaves are being manipulated in the pan, inevitably, tears and wears happen to some leaves, and leaf color changes as chlorophyll (the green pigment) in the tea is degraded by the hot temperature. In Chinese green tea industry, the outlook of the leaves is extremely important for tea grading, and torn leaves would be removed from high end tea. The more crushed leaves there are, the less final product can be obtained from the same initial amount of fresh leaves. So the tea worker has to find a balance between killing the enzymes in the leaves, coaxing the best aroma from tea leaves, minimizing loss of fresh flavor due to frying and minimizing leaf tears.

Sometimes, leaf shape and color do indicate the quality of the tea. For example, whole leaves often have less astringency than crushed leaves. Leaves that are over-fried both have dark spots and over-toasty flavor. On the other hand, the pursuit of perfect leaf shape and "fresh" leaf color sometimes causes problems. It puts pressures on the tea workers to pan-fry tea leaves less thoroughly than it's supposed to be. In recent years, this pressure is more and more found on teas such as Huang Shan Mao Feng, Xin Yang Mao Jian and quite a few others, which are not supposed to look as green as some other teas such as Bi Luo Chun. Green teas are of very different shades of green. But somehow in the market, "greener" color sells better. I didn't see this as much of a problem, because I thought tea processing was pretty much ruled by the tea workers. After all, they are the ones who know what to do. But in recent a couple of years, I've heard quite a bit complaints from tea farmers that how some merchants urge them to produce tea that looks "greener" and how some tea of improperly "greener" color would sell better than tea of perfectly darker green color. Market demands sometimes could shape production in a good way. But this case looks like an example of bad influence.

When an early spring green tea is not pan-fried as thoroughly as it should be, usually the leaves look greener and there might be less tear and wear (still depending on the worker's skill). So the tea could look "prettier". But such a tea usually tastes more grassy than it should. Such grassy taste is not as pleasant as the natural grassy, vegetal tastes found in some green teas. Even if the grassy taste is not a big problem for drinkers, the water content retained in the tea would be a bigger problem, as water accelerates biochemical processes in the tea leaves to make the tea turn bitter fast.

When going over factors affecting green tea's shelf life, I would like to put "processing" the first because I believe the intrinsic quality of the tea is the determining factor and much more important than how a consumer store the tea afterwards (which is important, but not that important as long as the tea is not abused).  However, in my observation, tea processing is often overlooked as a determining factor by both vendors and consumers.

How sad that "some merchants urge to produce tea that looks 'greener' and how some tea of improperly 'greener' color would sell better than tea of perfectly darker green color." I guess it's a consequence of a 'market economy'.

"... the water content retained in the tea would be a bigger problem, as water accelerates biochemical processes in the tea leaves to make the tea turn bitter fast." Very interesting! So how can you tell how much water content is retained? And then the question is, how much is too much?

I am so glad I happened to check out your blog. Thank you for keeping us informed about the many interesting things that concern Tea!

Thanks guys for your comments. I wasn't sure if I went too wordy sometimes :-p

SimpliciTea, that's a good question but I don't have a complete answer to it. Sometimes, by pinching the tea leaves, you could tell very dry ones and not so dry ones. Sometimes the leaves that were not thoroughly pan-fried would have some special grassy flavor in it. But very often, the difference at the beginning stage is so small that most people couldn't tell immediately, yet the small difference in water content could cause big difference in shelf life.

Thank you for answering my question. I had a sense it wasn't easy to answer, and I appreciate what you offered. Of course, I'll have to try pinching them now. :-p

I don't ever find your posts to be too wordy. Then again, I myself have been judged as being too wordy. I mentioned this to a friend that is good at putting a positive spin on things, and he said, "Joe, you're not wordy, your just descriptive!" I thought you may appreciate that perspective.

I just read in, Tea, History Terriors Varieties, that there seems to be a trend such that some find that the tea being beautiful is more important than it's taste. While I also enjoy watching the leaves steep (I wonder if my wife ever gets sick of me showing her), taste still comes first.