My first time ever having this tea. Such moments are always exciting!

This tea is produced in Yixing, the hometown of yixing tea ware. The tea is named after its shape - the dry leaves look like tiny bamboo leaves. This tea has a more famous cousin - Tai Lake Jade Bamboo, which is supposed to be very similar to this tea, but is produced in Wuxi, another region of Jiangsu province. Wuxi and Yixing are not far from each other and they are about 40 miles apart. Wuxi has very good soil/mud resource, which is used to make the famous Wuxi small figurines.

I had never had Tai Lak Jade Bamboo either. So I didn't know what to expect from this tea. The dry tea leaves look quite similar to those of Bamboo Leaf Green.

It's said that more than half of all green teas of Jiangsu province is produced in Yixing region. This is both surprising and not so surprising. I was a little surprised because Jingsu has quite a few famous green teas and Yixing green tea is not as famous as them. Meantime, it's not really that surprising, because Yixing was a famous green tea producing region throughout history. It was praised for its green teas long before it was praised for its teapots. Yixing has become a famous town of tea ware, not only because of its unique clay resources, but also because of its tea culture background. 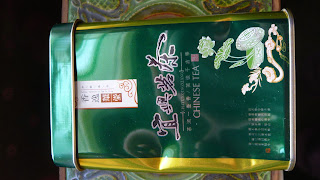 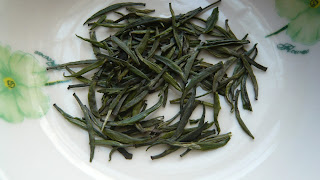 Since this is a low-profile tea, I didn't expect it to be super good. But it surprised me with its floral, sweet taste. Good producing location, good manual processing, high grade leaves, and freshness, the tea has got it all. In traditional green tea culture, the leaf shape and outlook of brewed tea are very important. This tea has got them too. Brewed in a tea bowl, the little leaf buds all "stand up" and look like a green flower. 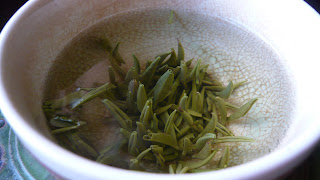 Then, why would some people say yixing is not suitable for green tea? Here are my thoughts:
1. I think it's not 100% correct, but has its reasons.

3. Some yixing clays are more absorptive than others. So indeed some clays might be less suitable for green tea than other clays. But it's all relative. A good yixing teapot won't be so terrible to ruin a green tea no matter what. Some more absorptive clays, after being used for a while, would become better seasoned. If one drinks green tea all day long (like in 18th century when there was barely any other tea in most part of China and most people didn't have as many yixing teapots as modern day shopaholics :-p) then it doesn't take long to have a yixing teapot well seasoned.

4. This myth of "yixing teapots not suitable for green tea" may somehow reflect the dwindling yixing teapots quality in modern time. Generally speaking, even when we talk about authentic yixing clay, there are a lot more low quality yixing teapots in modern day market than in the past. Historically, Yixing was famous not only for its clay tea ware, but also for larger clay wares such as plant pots. Typically the clay used for plant pots is of lower quality than the clay used for teapots, and the lower quality clay cannot go through very high kiln temperature without being broken. But in today's market, many yixing teapots are made by the clay that would have been only qualified for plant pots in the old days. And there are a lot of clays of borderline quality, better than the plant pots clay, but not good enough to sustain high kiln temperature. With compromised kiln temperature, the teapots would end up of lower density, and more porous than it's supposed to be. Such teapots would undermine taste of any high quality tea, and especially green tea.
at 9:58 PM