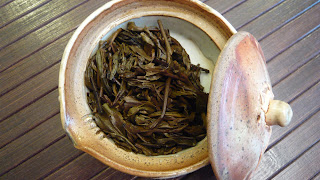 I started writing this right after I wrote the blog post about the 8972 brick, where I mentioned this tea. Somehow this post fell into the split of time and I forgot about it all this time...

The photo on the very top shows the spent leaves. The color bias is little (in spite of my poor photography skills), and I hope the photo can tell aloud that the leaves don't seem to have experienced any humid storage.

Now the tea liquor (one of the infusions... don't remember which one, probably five-ish): 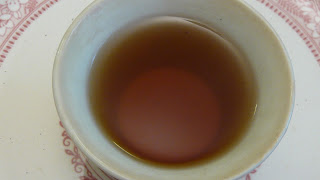 This is a CNNP tea labeled Menghai Tuo. It might be a product made for export. There isn't any date labeling with this tea. The production year of 1996 is according to the dealer who offered this tea, and he got this date from his source of purchase. So this is a fuzzy date. But it's generally consistent with my impression with the taste of this tea. Yunnan dry-stored tea ages much slower than tea stored in more humid places. I think the tea tastes like a typical Yunnan dry-stored tea, and it would take these many years for a tea to age to this level. But there is no way for me to tell whether it's exactly from 1996, or an adjacent year. 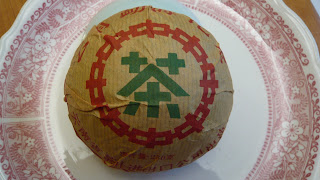 The tea doesn't have a inner ticket (nei piao) or tuo ticket (neifei). I like this tea very much. But in my opinion based on previously discussed criteria, this is a tea for drink instead of a tea that can make money for its collector, due to the fact that it doesn't come with full package and it doesn't have a whole set of paperwork with it. 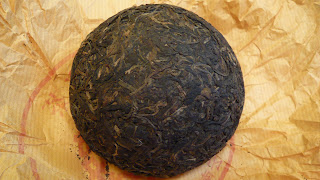 This tea doesn't have as prominent aromatic aftertaste as the butterfly tuo and 8972, which might be why I like those two teas better than this one. But I do think this tea has nice features of a Menghai tea, and its strength is probably not at aroma. The liquor has a nice texture that feels thicker and stickier than the other two teas. The aftertaste is not strong but lasts quite long.

Now, as promised, I shall show you some white stuff!

I didn't think much of the white stuff until a teachat discussion last year about a photo of the xia guan butterfly tuo. I don't have an intention to defend the butterfly tuo (because I like it, I own it, I probably can't be objective about it, and I think it's so great that it doesn't really need any defense). But I've found it somewhat interesting that a number of people do have deep concerns about the white stuff being mold, yet I had never related it to mold because I wouldn't think the dry storage allows mold growth.

Then, a year later, I bought a 2003 Chang Tai Yi Chang Hao small cake, a quite popular and somewhat rare cake, at a rather low price. I will write more about this cake later. The reason for the relatively low price is that there was a debate going on among a group of Chinese tea drinkers about whether this cake was of "bad, wet storage". I was interested in studying outcomes of storage styles. I even got some humid-storage tea (which I rarely buy) like one of these, and a bad-storage tea like one of these, so I got this little cake as well. It turned out, in my eyes, this 2003 cake is a purely dry storage and even drier than some other teas from this seller. I couldn't find a hint of bad storage or wet storage on it... but there was some "white stuff" mentioned by the seller of this tea and some other buyers of this tea.

This incidence made me further realize that how much impact the "white stuff" could make. But what else could I say. People believe what they choose to believe. And indeed the market is confusing and indeed there are a lot bad-storage teas out there. So I guess some tea drinkers were immediately freaked out by the white stuff on the tea and immediately returned the tea to the seller without even tasting it. In this case, I wonder how hard I should try to make it a point to others that I think this tea is a great dry-stored tea... after all, because of some people disliking it, I got it for a nice low price...

Many dry-storage teas I've had don't have white stuff. But I've also had quite a few dry-stored teas with white stuff on them, such as the above-mentioned butterfly tuo, and this one! 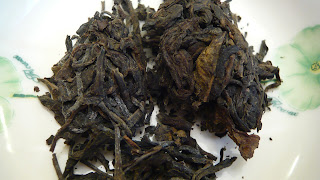 From this photo, you could see that it's not entirely exaggeration to say this tea is "covered by white stuff". In fact, this tuo has a lot more "white stuff" than any of the butterfly tuos that I've opened. There are a lot of white spots here, most abundant on tea stems and cut ends of tea stems (this is also what I've observed on several other dry-storage teas with white stuff,. I don't know why though. It might have something to do with the surface layer of the leaves and stems). 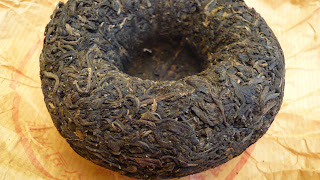 There is a Chinese saying that "A melon seller would always tell you his melons are the sweetest in the world." :-D  To some degree, it's true and it's people's perceptions. So sometimes I consciously hold back from giving too much explanation about my own tea (because of course I love them and think they are excellent...) This is not because I'm social phobia, but rather because there is no way to make everybody agree with what everybody else says (however, I believe, everybody would agree with this last sentence ha ha~). So probably we should save the time and find something more fruitful to do.

This is Shi Kunmu's explanation and I've found it quite reasonable. But on the other hand, this doesn't mean everybody would agree with it. In puerh world, Shi Kunmu, a very peaceful person, is sometimes a controversial figure. I don't agree with everything he said, but have enjoyed many of his articles and respect him a lot. Many people enjoy Shi Kunmu's products and have benefited from his teaching of tea knowledge. But I've also heard quite a few people bad-mouthing him (I like and respect some of those people too, without agreeing with them on bad-mouthing each other...). I feel, this Shi Kunmu phenomenon somewhat demonstrates that in tea world (or the entire world), nobody could be liked by everybody, nothing would be agreed upon by everybody, and debates will be going on, forever.
at 12:04 AM

lol What coincident. I received a pm from from someone telling me to check my Tulin 966 tuos. Cause after reading my review, he thinks there's fine mold from the photo I'd posted. I had my own doubts when I tried that tuo, but since that seller is well-known for his dry-stored, I didn't think too much.

So after a few weeks in Singapore, that tuo I'd used in the review had visible mold on it. The rest of the unopen ones at very close look, also have fine white spots.

The guy who pm me is know the seller very well, so he asked about that 966 storage today. The seller said those 966 are all placed on the bottom in his storage. So it's closer to the floor. BTW the seller is from Dali.

So ya, even dry stored tea if placed close enough to the floor/wall after years, there's still chance for mold to grow.

Hi Lord SBM, if a tea gets mold, no matter where it was stored (even if it was desert), then I don't think it should be called "dry-stored" anymore. The accidental flooding in dry storage is almost always worse than proper humid-storage.
However, the fine white spots on tea are not necessarily mold.