one of the most influential Chinese tea books

Below is an introduction written by Dr. Miles Xian Liu (comparative literature researcher, English professor and tea enthusiast) and me. And you could see the writing is much better-trimmed than my usual blog articles.

I read this book in (around?) 2007 and started my communication with Dr. Wan Xiaochun in 2008. After many conversations with him and reading some of his peer-reviewed research articles in tea biochemistry, I've got a thorough understanding about his passion in tea and his scientific vision that embraces this book.


A little bit extra that was not included in the formal introduction. The making of this book took 3.5 years (from early 2003 to late 2006). Several leading tea research institutions in China and dozens of the best tea scientists participated in the discussions for this book. From 2003 to 2006, these people traveled across country to get together for three formal meetings for this book. More than 300 top-grade tea samples were collected from more than 20 tea-producing provinces for the photography of this book. This kind of work, considering the amount of efforts and human resources involved, can hardly be replicated. This is probably why this book remains the most influential tea book of its genre in China.


The book, Chinese Teas (中国茶谱 ISBN: 978-7-5038-5854-3), is a single volume of comprehensive tea study by the leading experts in China.  Already two editions within three years testify to its significance and popularity.  Although a little pedantic in tone, the book is intended for general tea enthusiasts across the world. 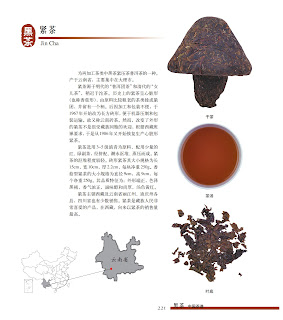 Comprehensive in its coverage and scientific in its discussion, the book—Chinese Teas—offers encyclopedia-like deliberation on a wide variety of teas in China.  The first of its two main sections chronicles tea origins, classification, history, and arts of tea ceremonies, with extensive illustrations.  It provides both the latest scientific analysis of health benefits of tea drinking and intriguing descriptions of twenty local tea drinking customs throughout China. The second section illustrates a hundred and twenty-nine varieties of Green Tea, five kinds of Yellow Tea, thirteen types of Dark Tea, two categories of White Tea, eighteen kinds of Oolong Tea, nine varieties of Black Tea, and several “Scented Tea.”  These hundred and eighty samples best represent many thousand teas in China.  With color photos throughout, a reader can get a quick overview of a tea, its history, producing region, and preparation process.  Whether for a casual read or academic research, this book can serve as an encyclopedia on Chinese teas.

Its general editor—Wan Xiaochun  (宛晓春)—is one of the utmost Chinese tea authorities, and his contributors range from botanists, professors, tea scholars to expert tea growers across China.  The wealth of information in the book thus represents the latest developments of tea research in China. The need for two editions within three years—2007 and 2010 respectively—shows the market demand for this book inside China. 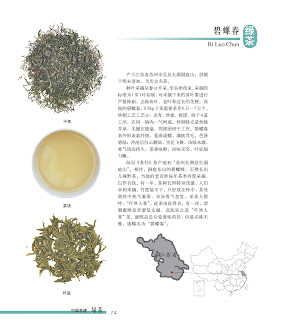 Wan, Xiaochun (宛晓春)—the general editor of Chinese Teas—is one of the utmost authorities on Chinese teas.  A leading scientist of tea research in China, he serves as President of Anhui Agricultural University and Deputy Director of China Tea Science Society.  He has written several books on tea, including a college textbook of tea science widely adopted by universities across China, and contributed more than sixty tea research articles to influential science journals both in China and abroad.  To write this book, Professor Wan has marshaled ten tea experts and scholars as his assistant editors from several universities and research institutions across China and published what many has regarded as the most authoritative source of tea knowledge among all Chinese tea books so far and the most influential book in its genre.
at 12:51 PM

Thanks for an interesting post! You have convinced me that 中国茶谱 belongs in my bookshelf. I have therefore ordered the book from Dangdang today!