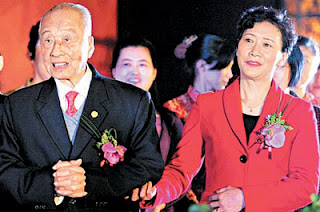 This is old news. But I've just found out about it, and think this is seriously juicy... :-p

Zhang Tianfu is like the Godfather of Fujian tea. He is one of the first generation biology professors of China, and has conducted tea research for more than 70 years.

Guess what! Zhang Tianfu got (re)married, last year, at the age of 100! In the wedding photo showed here, the bridegroom, Zhang Tianfu, was then 100 years old and now is 101 years old (actually 102 years old by Chinese way of counting). The bride was 58 years old by the time of the wedding.

I have to say, Zhang Tianfu looks very young for his age (his wife too!). I guess he has no problem to live above the age of "tea longevity" (108 years old). Those tea companies eager to sell tea by its health benefits, should just get him for their TV commercials :-D

By now, Zhang Tianfu has broken the record of Chinese celebrity wedding age set by C. N. Yang, the Chinese American Nobel-prize winner physicist who got (re) married at the age of 82 to a 28-year-old woman! When C. N. Yang got married, I was thinking, working on science and keeping the brain active must help a lot to retain one's youth and vitality! Now Zhang Tianfu must be a very convincing example how one can stay young with tea! Well, in fact, C. N. Yang is an enthusiastic tea drinker too. He spent a big chunk of his youth in Kunming during the war time, drinking tea and studying physics. (His story was mentioned in my earlier blog here.)

As gossipy as I am, I dig up a bit more... Zhang Tianfu's wife was an acrobat when she was younger. She was widow of a tea scholar who was son of Wu Juenong. And Wu Juenong (1897-1989, quite long-lived too!) was like the Godfather of Chinese tea. He was second to none in in the Chinese tea history of 20th Century, and was respected as the Contemporary Tea Saint by Chinese tea professionals of a few generations.

So much to gossip about tea romance and tea karma :-D
at 8:41 PM

Can we guess what his favorite tea is?

Hahaha...thank you Gingo, you just made my day. Hope you are enjoing your.:)