sipping tea in a war time 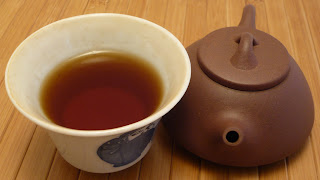 What is it like? I don't know. But when sipping a great Dian Hong (Yunnan red/black tea), I often let my mind travel through history back to 1938.

Starting from 1937, wave after wave of refugees fled from occupied northern China to the Southwestern provinces of Yunnan and Sichuan, leaving behind them everything of their previous life. It seems to me a miracle that once settled in Kunming, central city of Yunnan, people immediately picked up their tea drinking routine, and the tea houses in Kunming boomed.

The "official" Japanese occupation in China last eight years (1937-1945). But the military invasion actually started long before that and can be traced back to 1931 or even earlier. During the war, hundreds of millions of people died. Numerous temples from Tang, Song and even earlier dynasties were demolished. Many precious ancient books were bundled and sold for pennies by the measurement of "height of walk stick". Culture was ruined and elegant life styles were lost. Yet people had their tea, in war or in peace, in tea houses or in their bombarded homes, at weddings or funerals. For thousands of years, drinking tea is part of people's life. Even in a war time when everything was ruined, where there was tea, life was going on.

Life was not just going on. Life thrived. The best universities in China retreated to the Southwest around 1938 and stayed there till the end of the war in 1945. With extremely limited resources, for eight years, scholars and students lived in poverty and under frequent military air attacks from Japanese army. Yet they neither stopped their academic activities nor stopped drinking tea. The tea houses of Kunming were filled with students and professors, many of them would become the best contemporary writers, scientists, scholars or educators of China in the coming decades. Chen Ning Yang, the Nobel Prize winner of 1957, spent his war time in Kunming. His close friend, Huang Kun, wrote later, "Without hot water supply in our dorm on campus, we had our routine discussions on physics topics in the tea house... We stayed in the tea house every day between dinner and bed time." Up till today, some of my favorite writers are those who spent their war time in Kunming. Some of my favorite Chinese essays are about life and tea houses of Kunming during the war.

During the war time, people not only drank tea, they also create tea. To me, Yunnan red tea is always special, not only because of its unique bold flavor, but also because it's a tea that was created during the war time in 1939. In 1937, Feng Shaoqiu, the creator of Yunnan red tea, was forced by the war to leave Keemun, where he had made great contribution to the processing procedure of modern day Keemun red tea. When most major tea producing regions in China fell to Japanese occupation, Chinese tea professionals started to look for new potential regions for tea production. In Yunnan, they found great soil and best tea tree varietals for red tea. When Feng started his work to build a tea factory in Fengqing, Yunnan, he had almost nothing, no constructional materials, no skill workers and no equipment. The entire country was in war, and all kinds of resources were in short. But miraculously Feng and his colleagues managed to build up a small factory and produced 15 tons of red tea in 1939. The 15 tons was tiny amount compared with today's tea production. But from then on, Yunnan red tea was sold to the Western Hemisphere, first by way of Hong Kong and then by way of Burma. Trade of Yunnan red tea greatly contributed to the national income in early 1940s when China's economy was largely devastated by the war.

No, I am not missing the war. It's one of the most devastating things that can happen to a society. But when I look back into history, I am in awe how much people achieved in war time, beyond survival. I believe what is not destroyed by the war, can live stronger than ever.

War kills, ruins, destroys. But war didn't diminish tea. It only caused another tea variety to be invented. Such connection always makes me think Dian Hong is a tea full of life.
at 10:46 AM

I did not know much about that war or time period! That is probably one of the most informational posts I have ever read! I will think differently next time I sip that tea!

My reaction,as a theoretical physics major, might be strange, but... sorry. Everyone in my field has the utmost respect for the guy known in the Western literature as C.N.Yang.

So is Chen the family name? I know it's irrelevant and very stupid of me, but can you please be so kind as to post his full Chinese name, if you have it?

This is the marvellous post that I have come over after huge searches. I am really thankful to you for providing this unique information about shipping tea. Thanks.....

I love this post, especially how you describe that wonderful things (like Yunnan read tea) can come out of horrible times.