This tea was produced in 2006 and released in 2011. At that time, it was rather uncommon for large tea factories to release teas that was produced years ago. Usually large factories sell new tea. But since then, there seem to be more and more young-aged-teas released by large factories. Why is that? I think the following factors play a role (and there might be more factors...):

1. Many factories have unsold teas during the chaos from late 2007 to 2008, and if they could (financially manage it,) they would rather hold the tea till market got better. And the market got better after 2009.

2. Sometimes a tea doesn't taste good at certain stage, and a savvy manufacture would wait till it taste better and then released it to market. This rarely happened a decade ago, when many puerh drinkers in mainland China drank new tea only. But now it makes more sense to both manufacture and tea drinker to have young-aged-tea released.

3. In the puerh world, people are telling each other, "the older, the better..." But a lot of young teas are not that palatable. Then sometimes when you buy a new tea, you would feel you are buying a promise, which may or may not be fulfilled. Therefore, selling young-aged-tea is one way for a manufacture to demonstrate its quality.

4. Somehow, with the rapid increase of tea prices for both raw materials and compressed products, in recent years, very often, young-aged-teas are not much more expensive than new teas (ironically...). So some manufactures would choose to use their storage more and buy less new harvest, and some tea drinkers would choose to buy some aged tea instead of new tea.

The tea overall looks quite young. Although I got it from a Guangzhou dealer, I would assume the tea was stored in Yunnan before its release. 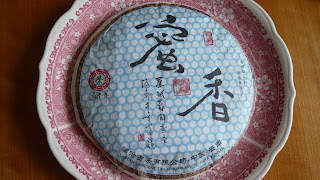 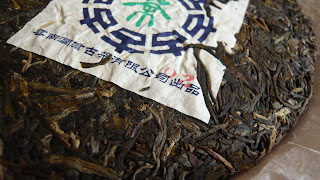 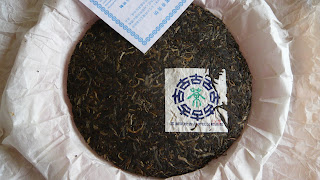 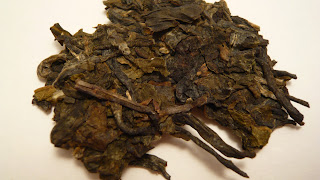 It tastes quite young and you would need to be careful brewing it in order to get the aroma without too much bitterness and astringency. But the tea has started to taste interesting - by interesting, I mean, it's not as "straightforward" as new tea. Its aroma seems to change in your mouth and circulate in your mouth with twists and turns, and the aftertaste is quite long. 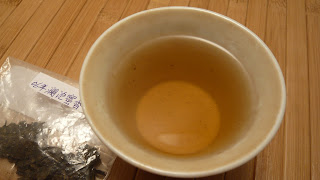 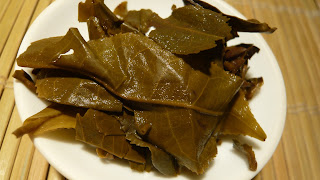 The tea was released at the same time with another 2006 shu cake which is called "sweet aroma". I had a sample of that one and thought it was pretty good - not stinky, tastes good, that's basically my modest standards for shu.

Finally, a little story about Madam Du (or, in Chinese, 杜老太太), the owner of Lan Cang Ancient Tea factory. She is a legendary figure in puerh world. She took over the previously state-owned Lan Cang Jing Mai Factory in 1998, when the factory was at the rim of bankruptcy. She made it one of the largest and most reputable puerh factory within 10 years. It is also one of the factories that own most ancient tea plantations and biggest aged tea collections. There are many big stories to tell about Madam Du, but here is a little story that I've found interesting. In a public interview, when asked how she would distinguish teas from different mountains, different villages and different manufactures. Her answer was short and simple, "...sometimes it's easy, but you can't expect me to be able to tell every single time." And as a 60-year-old tea guru who started her tea career at the age of 16, she said it naturally and confidently.


I particularly like this little story, because, ironically, this kind of honest yet confident answers are not commonly seen in puerh world. I have no problem saying "I can't" because I'm nobody in puerh world and I can't do most of the things that puerh professionals do anyway. Madam Du has no problem saying "I can't" because she is at the top of puerh world, and she could be confident that what she doesn't know, most people don't know either. But you can imagine, between my level and Madam Du's level, there are numerous tea professionals and tea experts who know fairly well about tea, yet don't want to admit what they don't know or what they are not sure of. Since I read Chinese tea books sometimes, and in recent years so many of them have been published, I have to say, some Chinese tea books (and especially puerh books...) are rather funny... funny in a way that makes me feel that not only the author doesn't know what he is talking about, but also he is somewhat very sure what he said is absolute truth. Fooling oneself is always worse than fooling others :-p There aren't many English language tea books yet, and the few I've read are pretty good and sincerely written. Let's not expect any "funny" type of tea books in English language in the years to come.

It's not hard to understand that tea, as a biological product, is extremely complex. It shouldn't be surprising that even the most knowledgeable people won't know everything, and not all the subtle differences between teas can be discerned by human organs. But in puerh world and in business world, a lot of people are reluctant to say "I can't" or "I don't know", and over-confident to give theories that are not necessarily well tested. In this sense, Madam Du is a role model, not as a "know-it-all", but as one who knows better than most people and knows what she doesn't know.
at 7:44 PM

Madame Du: That's what we call "Beginner's Mind," in zen. I think it's the stages between beginner and master (e.g. most people) when you have some level of knowledge that you tend to overestimate yourself or boast.