These little tea "balls" were produced in 2010, used tea leaves from Big Snow Mountain （大雪山）, a tea district in Lin Cang region, near the town of Meng Ku. In my personal opinion, it's one of the regions that produce puerh that can be quite tasty when young.

What's special about these balls is, they are hand made with whole leaves from big trees.

Each "tea ball" is about 8g. My only complain is it's a bit too much for one tea session of mine. But to make tea balls manually, this is probably a perfect size and good compromise between production and tea drinking. Besides, if I think 8g is too much, it's my fault because I was drinking this tea alone. Tea is meant to be shared anyway! 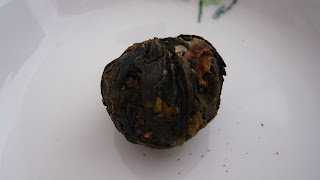 I used the little shibo from Petr Novak, my current favorite vessel for sheng! I should have given the shibo a better photo. Next time!

The "tea ball" wouldn't dissemble after a few infusions. 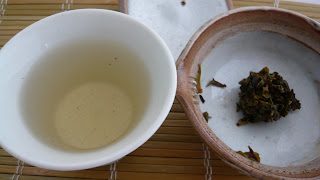 The tea went for quite a few infusions, probably above 10. 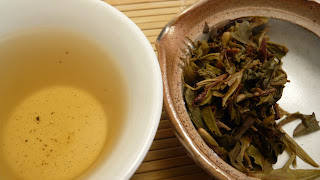 The tea leaves near the end of the tea session. 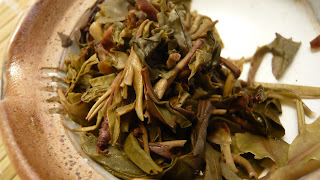 What I like most about this "tea ball" method is that all the tea leaves are preserved intact to the maximum degree. There is no prying required, which is both convenient and avoids damage of tea leaves. I have no idea whether this is a good way for long-term aging. Currently not many manufacturers are making "tea balls", as the manual work is somewhat exhausting and buyers are not very keen to it, because the beauty of the leaves aren't so obvious on a small "ball" as on a tea cake.

But interestingly, "tea ball" is not anything new. In 1960s, when tea experts uncovered and tasted some puerh from Palace Museum, the previous royal palace of Qing Dynasty, among all types of puerh, there was a type of "tea ball" as big as "ping pong (table tennis) ball" documented. The "ping pong ball" puerh sounds like 3-4 times as large as this 8g "tea ball". But they should look quite similar! I also wonder how the "ping pong puerh" was supposed to be consumed. Since it was already made in such small size, I guess a whole ball was supposed to be used each time, either in a large teapot shared by several people, or separated into a few smaller pieces and distributed to different guests.