It was something interesting that I would like to try. I don't know if I should call it puerh or green tea, as this traditional tea of multiple ethnic groups in Yunnan and Guizhou was not meant to be aged. But the processing of this tea is quite similar to Sheng puerh (which, some people argue, is basically a type of green tea), and many people just take it as puerh.

Traditionally, the most famous Ba Ba Cha was made with leaves of Jing Gu Big White Tea cultivar. Although called "white tea", this cultivar is quite different from the white tea cultivar from Fujian, and this tea was famous for making green tea. Nowadays, Jing Gu Big White Tea cultivar is also used to make puerh (sometimes sold for quite a high price), while some people argue this cultivar is not suitable for making puerh that is to be aged. But, the border between puerh and green tea is sometimes blurred. So it's hard to say which saying is more right than the other.

The one I tried here is a typical simple and cheap Ba Ba Cha. It's made from Nannuo autumn arbor leaves, the same leaves people use to make puerh. In my understanding, this tea was made into Ba Ba Cha mainly because it's an easy (and therefore less expensive) way of making tea. 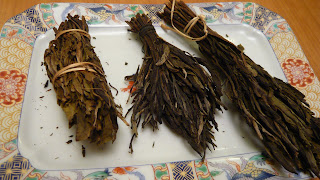 Since it's a cheap tea mainly enjoyed by local blue-collar workers or peasants, I thought I would brew it the Yunnan way, instead of the gongfu style. I brewed it in a glass, and I guess I put too much tea in the glass. 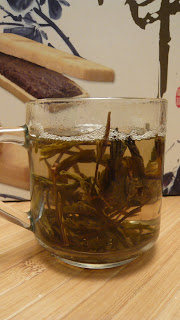 It was not as harsh as I had thought, but indeed somewhat harsh. To me, the harshness is onto the stomach, but the flavor is not very bitter. It was actually a lot less bitter and astringent than I had thought, for such a crude-looking tea. I guess it's partially because the simple processing kept most leaves free of being crushed.

It's not something that blows me away. But I was glad to have tried this somewhat "exotic" tea. Besides, this simple and cheap tea indeed outperformed my expectation.
at 12:40 AM

Sounds very interesting. I didn't know that "the border between puerh and green tea is sometimes blurred." I also don't know much of anything about how puerh is processed (or, now that I think of it, much of anything, period. :p ), other than that it is processed in a way that allows fermentation to take place, and my understanding is is that that is very different than one crucial step in the processing of green tea: where oxidation is halted. Stopping oxidation also means it won't ferment, correct?

I am looking forward to trying some of this tea (no matter how it ends up tasting), since I always enjoy experiencing different aspects of a culture (as in, drinking tea that "mainly enjoyed by local blue-collar workers or peasants,...").