By weight, this tea is by far the one I consumed the most since the autumn started. In some sense, I feel as if I am not *drinking* it as a tea, but *eating* it as some soup.

It's a 1kg brick, and the first 1kg brick that I think I can finish in foreseeable future :-p 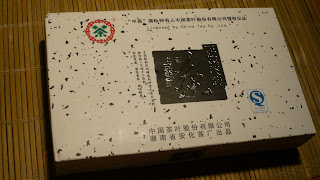 The most important feature of Fu Zhuan is "golden flowers" - yellow fungal growth inside the brick. In traditional Fu Zhuan market (which was mainly in Muslim and Tibetan regions of Northwestern China), amount / density of golden flowers was the sole criterion to evaluate the quality of Fu Zhuan. Therefore, in the package of almost every Fu Zhuan product, the manufacture would brag about how abundant the golden flowers are on their Fu Zhuan. The frequently used advertising is "Abundant golden flowers and rich fungal aroma" - which may sound funny if used on any other food product :-p 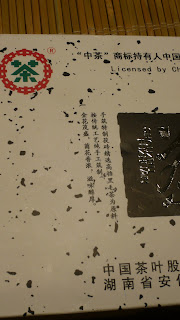 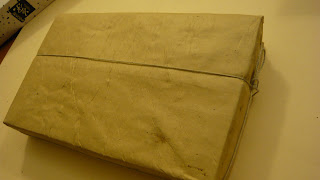 Usually the golden flowers are not seen from the surface of the brick. 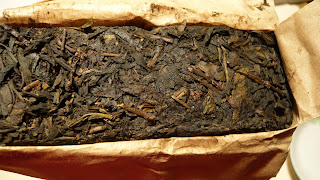 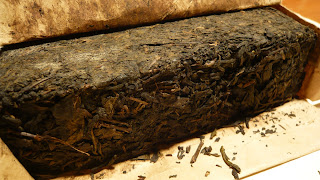 Once pieces are broken off, "golden flowers" inside the brick are exposed. 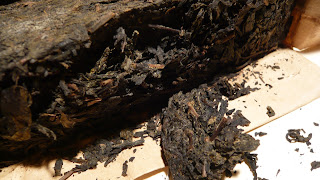 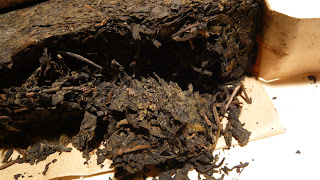 Compared with typical Fu Zhuan in the past several decades, this Fu Zhuan uses leaves of significantly higher grade. This one I tealogged on steepster is a typical old style Fu Zhuan with much older leaves and a lot more stems. Usually older leaves and a lot of stems are necessary for a brick to nurture "golden flowers". There is technical challenge involved when higher grade leaves are used in a Fu Zhuan. But interestingly, golden flowers in this brick are really abundant. And to my surprise, I barely found any golden flowers in the older style Fu Zhuan I tealogged on steepster - which might be just an exception, since that product has a reputation of having lots of golden flowers. 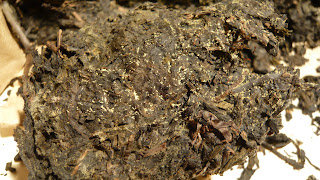 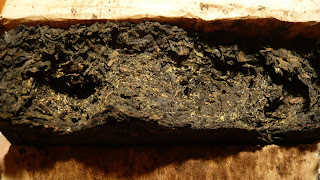 Sometimes I gongfu-brew this tea. It has all the sweet, buttery aroma of Fu Zhuan, and tastes smoother than most other Fu Zhuan products that are made of older leaves. The tea doesn't have much aftertaste. It's bold and straight forward, not the lingering type. Probably it's these features of this tea that make me almost feel as if it's a soup instead of a tea! Sometimes, it feels like a need to drink it after a big lamb chop meal. This tea makes me feel as if I were a nomad or a hunter on the prairie :-p 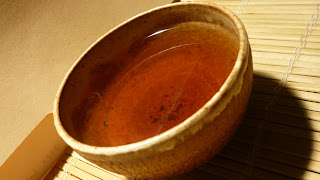 More often than not, I feel it a little funny gongfuing such a tea, a drink of nomads. So sometimes I make it into milk tea by mixing half a glass of tea with half a glass of milk. When mixed with milk, the tea's taste is weakened. But it's a very pleasant way of drinking milk, and I think I enjoy milk tea in winter more than in summer. 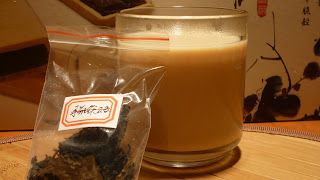 In the past, I had Fu Zhuan only occasionally. The typical Fu Zhuan was made of crude older leaves and a lot of stems. In fact, I never dislike the cheap Fu Zhuan. It tastes quite sweet. The one I tealogged on steepster is a typical old style Fu Zhuan. It looks somewhat scary, but tastes ok. But with the older, crude style Fu Zhuan, I never drink Fu Zhuan as frequently as I am drinking the current one now. I had been wanting a kettle to boil Hei Cha (or sometimes even puerh) for some time. But it was not a great need until I started to make Fu Zhuan a winter night routine. Eventually I bought this simple kettle from Amazon. I throw Fu Zhuan pieces in cold water and boil them on the stove to make a big pot of tea for the night, and often there is extra for the next day.

Hu Nan Hei Cha ("Black Tea" in Chinese traditional terms) has become more and more trendy in recent years. Last year, to my surprise, Hu Nan Hei Cha was even listed as one of the top 10 Chinese Famous Tea in Shanghai World Expo. I immediately thought the top 10 list must be a list of money and power. And later I was confirmed by one of the organizers of the "top 10 list committee" that each representative (local government OR a company) was officially required to *donate* 1500K rmb (USD $230,000) to be listed as one of the "top 10". I never think it's fair to list Hu Nan Hei Cha in top 10 of Chinese tea (besides, Hu Nan Hei Cha is not one tea at all, but a general category). But if seeing Hei Cha fashion from a more positive view, I am glad that the promotion of Hei Cha is not just a market hype, but involves significant changes and improvements in products. This CNNP An Hua Factory product is quite different from typical Fu Zhuan in the old days.

Seeing the changes in newer Fu Zhuan and some other Hei Cha products, I hesitate to call them "new style" and the older style "traditional style". For example, this CNNP An Hua Fu Zhuan is hand-constructed, while the older-style ones are mostly machine-compressed. But wasn't hand-constructing the only way to make a tea brick 100 years ago? Then this newer product is closer to tradition. Besides, Hu Nan Hei Cha had its brilliant history of being a royal tribute tea. Was the royal tribute in Qing dynasty all made with crude, lower-grade leaves? The newer Hei Cha products made with higher-grade leaves, who can say they are not closer to the traditional tribute tea?

By taste, I think Fu Zhuan is one of the most friendly teas - sweet, easy to brew and almost no bitterness or astringency. It has some marine / sea weed taste that some people may not like. But the marine taste of Fu Zhuan is not as overwhelming as in some other teas. In fact, I usually dislike marine taste in tea, and Hei Cha (especially Fu Zhuan and a few other Hunan Hei Cha) is probably the only tea with marine taste that I adore. But I don't know if Fu Zhuan can ever get popular in modern society. About Fu Zhuan, one of the most interesting feature is, of course, its golden flowers. This feature, I believe, is also why people may reject Fu Zhuan. I once run a golden flower survey on TeaChat. Although there are not many responses, it demonstrates something - people would either take it or reject it, without much hesitation in either way. The overall result of this survey is quite similar to that of a same survey I once ran on a Chinese tea forum. As much as it's adored by many ethnic communities, Fu Zhuan has never been popular in "mainstream" society in China any time in history. Most of my Hunan friends never consume Fu Zhuan. You can't blame people for not wanting to put some yellow fungi into their mouths. But then, I am not here to say Fu Zhuan *cannot* become popular. I somewhat feel Fu Zhuan gets along very well with meat/dairy dominant diet, which was not typical in ancient China but more of a trend in modern China and most parts of the post-industrial world, for good or for bad.

This tea may never get much attention from the administrators. But sometimes I am curious about this - if FDA were to inspect a Fu Zhuan, would they ever approve it as a food / beverage product? Last time when I gave some Fu Zhuan sample to a friend, I said, half-jokingly, "It's not FDA-approved. It has yellow fungi, a lot. You are welcome to take it away and do whatever you wish with it. I didn't urge you to take it with you. I am not suggesting you should drink it. I am not suggesting anything..."

(I put a "puerh" label with this blog entry, mainly because Hei Cha is categorized with puerh in many books and by many vendors. However, I personally think Hei Cha and puerh, either sheng or shu, share very few common features and don't belong to the same category.)
at 4:51 PM

Very cool post. 很有意思. Thanks for spotlighting this rare tea. I have never tried Fu Zhuan before. What is the Chinese for Fu Zhuan?

Have you ever tried the 冬蟲夏草 (winter worm summer grass)? I have an herbal blend based on that stuff that I bought in Taiwan. It is very interesting but I didn't really like the way it made me feel.

Brett, it's 茯磚 in Chinese.

I've never had 冬蟲夏草. It's very precious and very tonic! Why didn't like the way it made you feel?

If I drank even a little tiny cup of the 冬蟲夏草 herbal that I bought in Taipei I felt a bit nauseous and empty-headed. I'm really not sure why.

I always learn so much from your blogs, thank you