Yi Liang Long Jing (宜良龙井), a.k.a. Bao Hong Tea (宝洪茶) is a historically famous green tea. In the title I put "Long Jing" as quote-and-quote, as it's not the "real" Long Jing from Zhejiang. However, the name Yi Liang Long Jing is not a recent invention and has at least a few hundred years of history. Until recently, I hadn't got a chance to taste it, as its popularity has long gone in tea market. Out of curiosity, I asked my Yunnan black supplier for a couple of samples of this tea. 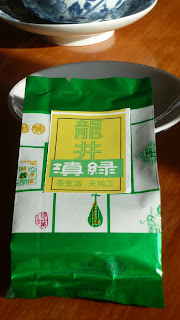 This tea is produced from Yiliang county of Yunnan. Tea from Yiling has been famous since Tang dynasty. Up till Ming dynasty, Bao Hong Tea was a royal tribute tea all the time, and was given the title of "the best tea of China" by some scholars. I didn't find out when its nickname, Yi Liang Long Jing, started to be used. But I guess it was after the "real" Long Jing became the nation's favorite. 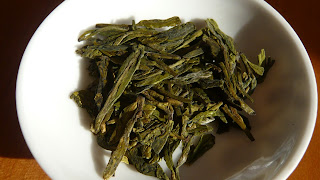 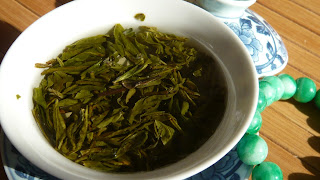 Compared with the "real" Long Jing, this tea has more uprising aroma, which may or may not considered a merit. In fact, in spite of the similarity in the outlook, the two "Long Jing" don't have much similarity in their tastes.

I personally still prefer the "real" Long Jing, which has more implicit aroma and a deeper, complex flavor profile. However, who knows if my personal taste is partially a result of the Chinese "main stream" taste formed in the past a few hundred years? I have grown up in a tea culture dominated by green tea, and have been influenced by the tea aesthetics which takes the "real" Long Jing as one of its best representatives. If some people outside this "green tea traditional culture" taste and compare the two "Long Jing", I don't think all of them will prefer one same tea to the other. After all, who is to say "what's the best tea" and "which is the better tea?"

Gingo, thank you for another glance in to the world of the Chinese tea -history and context.

I appreciate for your work. Thank you very much for

your information, nice job keep it up.
international shipping

This tea was really interesting for me to learn about, through this post. I added this material and a reference to this post to RateTea's page on Dragon well tea.

Hopefully I can try it some day!

Thanks for this post, it made me go out and look for this tea and today it saved me after having opened a bag of 'real' LJ well past its prime and quite disappointing. Casting about for something better I remembered this tea.