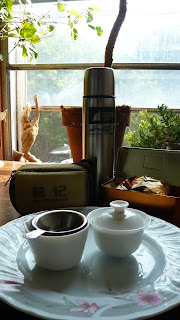 I first read about Wu Wo Tea (Selfless Tea) in Tea Culture, a college textbook of China Southwestern Agricultural University, written by Liu Qinjin. The idea attracted me immediately. Later I learned more about it from the website of Wu Wo Tea.

Wu Wo Tea is a tea activity designed by Cai Rongzhang, the first manager of Lu Yu Tea Center of Taipei. Lu Yu Tea Center is a for-profit company, but since its establishment, it has organized many invaluable education and cultural activities. Wu Wo Tea is one of the most influential activities. It's held periodically throughout the year, and is also adopted by companies and organizations as an activity to promote teamwork spirit.

The basic idea of Wu Wo Tea is, tea drinkers gather to drink tea. Everybody brings his or her own tea, a small teapot or gaiwan, small tea bowls (about 4), thermos and hot water - simple and inexpensive gears, pretty much like the set showed in the picture (the small tea bowls were not taken out in the picture). People sit in a circle, in an order randomly assigned by the host. Then, in silence, people start to make tea. Each participants make, for example, 4 cups of tea. Three cups go to the three people on the left of her, and one cup for herself. Then, for each infusion, everybody gets 4 cups of tea, one from herself, and three from people on her right. When everybody has 4 cups of tea ready, the group start drinking tea. After drinking, people start making the next infusion and share the tea in the same way. Throughout the activity, there is no talking, simply making tea and sharing tea. After several infusions and rounds of sharing, the activity ends.

In Wu Wo Tea, every tea drinker serves others and is served by others. Besides drinking his own tea, the tea drinker also get a few other teas, which may or may not be the same type of tea as his own, and can be higher or lower quality. There is no verbal conversation or commands. Tea drinkers try to follow the group pace in tea making, and try to make the best out of their teas to share with others. The activity can be held indoors or outdoors. Once on a scenic site out of Beijing, I saw some Taiwanese tourists sitting in a circle drinking tea quietly. It was such a beautiful scene. Back then I didn't know about Wu Wo Tea. But now when I am thinking of it, I guess they were probably having their Wu Wo Tea.

Ever since I learned about Wu Wo Tea, I've hoped someday I can participate in one! I like the meditative and action aspects of it. After a lot of positive influence, I am still very bad at meditation. It's hard to learn doing nothing! But this tea party sounds fun, because not only it provides you tranquil moments, it requires you to do something - making tea. Besides its meditative aspect, it satisfy tea drinkers' need of making tea. I know a lot of tea drinkers who enjoy making tea as much as drinking tea. A tea part in which everyone makes tea sounds fun! In addition, I like the feeling of tea drinkers united. I guess many tea drinkers are loners (which is not necessarily bad because basically all scientists and artists have to be loners for at least part of their lives). Sometimes tea drinking is entirely private - which indeed sounds unfortunate. How nice to make tea and share tea with a group of tea drinkers! The communication is not through language, but through tea!

I've got my gears ready but don't have a party to join yet. My tea friends, I hope someday we can have some Wu Wo Tea together! And be sure to let us know if you are going to have a Wu Wo Tea party someday!
at 1:57 PM

Thanks for sharing this with us Gingko. Could you explain the thing on gears? Is it an just all the tearwares need for the Wu Wo Tea ceremony, or is it a specific tea ware.

It's really cool idea, and you have be wanting to do this one day. Maybe someday... lol

Yeah it's just a set of tea ware that's easy to use and carry around. In the photo is my travel tea set, with a gaiwan, a few tea bowls and an outdoor thermos. I think I can carry it anywhere when there is a tea party :D