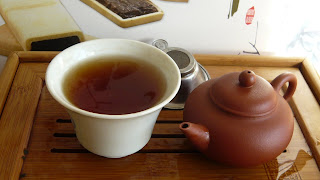 As you know, my tea motto is, tea drinking is a luxury of time, and not necessarily a luxury of money. We all know that yixing prices are higher and higher nowadays. Not necessarily a luxury of money? Well, it's all relative what "luxury" means. But overall, I believe yixing purchase just demonstrates that spending time is more important than spending money. I'm sure money could help one have a lot of fun. But having a lot of money isn't the only way to have a lot of fun.

This little teapot showed above is one of the least expensive yixing teapots I have. I bought it several years ago from Yunnan Sourcing for about $25. I bought it partially because it was a good deal (Yunnan Sourcing has a lot of good deals!) and partially because it was an interesting phenomenon that *many* people from teachat back then bought this same teapot from Yunnan Sourcing. It was pretty much a group effect. I remember seeing numerous tea-show photos from various people on teachat with this teapot. When I bought it, I took a look at the author's name - Zhou Huaqiang - and didn't think much of it. There are hundreds of thousand yixing potters in China. It's not always possible to tell who is better than whom.

I use this teapot very often. It's probably not one of my top 10 (or top 20) favorite teapots. But it's just so easy to use and so pleasant. As mentioned before, it's one of my favorite travel teapots. This is very similar to the phenomenon in shoes (I mean women's shoes, not necessarily men's shoes). I have about 60-80 pairs of shoes, but probably fewer than 15 pairs of them are in constant use, and my favorite and prettiest shoes are not all within these 15 pairs. (And there are several pairs that I have never worn yet since purchase.)

Later, a tea friend of mine in China mentioned to me that he got an inexpensive teapot that worked very well. And the name of the potter is Zhou Huaqiang. I was happy that we share teapots from the same rather unknown potter. What a coincidence (because there are hundreds of thousands of yixing potters)! And this helped me remember the name of Zhou Huaqiang better.

In the past a few years, I talked with more yixing professionals and learned from them several key points to aim at if one wants to make shui ping teapot "the Factory No. 1 style", including the shape of the tip of the spout, the connection lines at various locations, and angles of different sections. Then, I realized that this summarizes very well why some shui ping teapots look nice and are easy to use. At that point, when I looked back to Zhou Huaqiang's little shui ping teapot, I could see that it indeed hits all the key points. The teapot is made of regular grade of red clay mixed with sands - nothing fancy, but regular and good clay. It's a semi-manually made pot - hand made facilitated by shaping tools (this method would qualify as completely hand made in most other fields of pottery, but is classified as semi-manual in yixing, in contrast to the fully hand made method). Overall it's not an upscale teapot. It's just an ordinary teapot made by an ordinary young potter. But when I gained more understanding about the shui ping style, I've come to appreciate this teapot more, and know that it's a sincerely made piece.

I usually don't have much idea about how much each specific yixing potter is "worth". But recently in an occasional market observation, I noticed that these days Zhou Huaqiang mainly focuses on fully hand made teapots (a sign of "doing well" for a yixing potter) and all his teapots are sold for a lot higher prices than $25 (this is also because they are fully hand made, of course). This by no means indicate that the little shui ping I have and my peer tea drinkers have are worth a lot of money now :-p And that's not my concern anyway. But it's nice to know that Zhou Huaqiang is doing better and better in merely several years. And I was not surprised. The man who put sincere work into a regular piece of work that didn't make much money for him, is a sincere artist. And he deserves success. I'm sure it takes much more than hard work and good work ethics to succeed, and there are talented and hardworking artists who don't make it to the very top of the food chain. But I'm glad to see this guy is doing well, and I believe being sincere to the work is one of the basic and essential quality of an artist.

Another teapot I used to like very much is this one. And probably you could tell I really enjoyed it from my 2-week report. 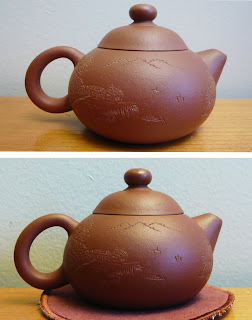 Since I bought it myself from China, and since back then USD to CNY was still 1:8.3 (yeah good old days!), this one cost even less than $25. And it's such a cute pot! I said I *used to* like it very much, because very unfortunately I broke the lid shortly after the 2-week report :-(

I managed to "glue" the shattered pieces with rice soup - not a water-proof glue, of course...

The teapot holds as one piece very well (rice soup is miraculous) as long as it doesn't touch water.

So I barely ever use this teapot anymore. But I still use it as a sharing pitcher from time to time. And occasionally, I put the lid of the aforementioned Zhou Huaqiang shui ping on top of this teapot and it fits quite well. Funny thing these two made a good match! This teapot was made by Ji Weicheng - and of course he was only one of the hundreds of thousands of yixing potters and I didn't have much idea how much he was "worth". But overall I was impressed how well made it was for its price level. When I saw the name of Ji Weicheng earlier this year, he was listed as a well respected yixing artist and he mainly focuses on fully hand made teapots nowadays. Obviously he is doing well, after merely several years. His teapots aren't yet among the most expensive ones, but obviously he is at a whole new level now. And I was not surprised. I only regretted that I didn't wrote to him to beg for a new lid when his teapots were much cheaper :-p

Not all the unknown potters are as good. Around the same time I bought the Ji Weicheng teapot, I bought another inexpensive teapot made by another unknown young potter (whose name shall not be mentioned here...). At the beginning, it had great difficulty just pouring water out of it. After a quick examination, I found that 3 of the 7 strainer holes were clogged by clay, and another few of them were half-way clogged. It was the first time I had ever done something like this. But I found a big pin, straightened it, and used it to dredge the 7 strainer holes. I did it successfully and it took me 10 minutes. I felt both upset and amused. I understood that it was an inexpensive teapot, with regular clay and regular level of craftsmanship. But I did expect a teapot to pour smoothly. Besides, it doesn't take that much work to do some quick quality control or quick fix (it took me 10 minutes). The potter who made this teapot, as far as I know, is by far not as successful as the above-mentioned two. Probably he could still make a good living in the billion-people market of China. But I believe he is at a completely different level than the other two.

When reading my own 2-week report of the Ji Weicheng teapot, I saw that back then I said I was quite satisfied with these well made inexpensive teapots and wouldn't plan to buy any expensive teapots anytime soon. The funny thing is, I still feel this way now. In today's market, maybe $25 yixing teapots aren't that common, and even twice or triple the price would be seen as inexpensive. But within the relative price ranges, I've come to see many more well made inexpensive (well, relatively inexpensive) teapots made by unknown young potters. I didn't become much richer than several years ago (although I wish for the other way). Besides, I break things rather stupidly (as witnessed by the Ji Weicheng teapot...) and probably I should be banned from using expensive and fragile things :-p That being said, if I had a lot of money, I will surely buy more beautiful yixing teapots and spend more money on them (when I said this, someone in the house is scared...). But meantime, I always believe ordinary and sincerely made teapots deserve our appreciation too.
at 9:48 PM

Years ago I acquired a inexpensive zisha pot on the outskirts of an Asian town. The pot is a typical small(100ml)shui ping. The handle on the pot is of a style I have only seen in photos of eighteenth century examples. My guess is that within a certain area of China there is a linage of masters and apprentices who have passed down the use of this type of handle.

and..rice soup...?? Really? How does that work? I always used superglue.

Nick, believe me, 60-80 pairs is very ordinary level for women's shoes :-D
Starch paste was the superglue in China before glue was invented :-D

Guy with a small shui ping, would love to see a picture of it!

Hey ^^ Nice post. I totally agree with you about the fact simple teapots can bring you a lot of pleasure (we can even say the same about simple teas).

I was wondering if you thought about repairing your pot's lid with Kintsugi? You know, japanese repairs made with gilded lacquer.

Well -- not the omg-so-pricey-traditional-Kintsugi, more the DIY cheap Kintsugi. They are selling kits out there, I bought one some time ago and you can see some pictures of the repair results here: http://tealeavesandviolins.wordpress.com/2013/09/26/post-en-images-faux-kintsugi/ (I promise I am not a spam!bot :D nor am I related to the sellers.)

I'm VERY clumsy and brake a lot of teapots and gaiwans that way -- if I had to buy a new one each time I brake something, I'd be selling my mother in less than three months. Plus, the result is pretty nice and not toxic like super-glue can be, so I thought why not share the trick with other tea fans. ^^

Give it a thought maybe? At least you could use your teapot without fearing its lid tearing apart again.

Hi Leaf, thanks! It looks very interesting and nice! And you did nice work on the broken tea wares. And indeed you broke more tea wares than I did :-p

Wonderful article, so fun to hear about other people's views on tea and culture. I have been living with a family of tea farmers in Xishuangbanna Yunnan in Southwestern China, the birthplace of tea. The first tea the world ever had is what we now call Puer tea, raw Puer. After spending much time with this family, I have been able to share this tea with folks. The culture, the love, and the way this tea makes you feel is incomparable and the tea is all from one family, one farm. Definitely just would love to chat about tea sometime if you want to write me. www.MistyPeakTeas.com happy to send out any samples as well. Anyone tried Raw Puer tea? The green kind?