If you ever wonder about the microbes in puerh, let's take a quick look at a paper from Journal of Tea Science (by Zhao et al., Journal of Tea Science, 2009, 29(6): 436-442) about fungi identified in 60 puerh samples. The journal is in Chinese language. But nowadays most of the best peer-reviewed Chinese science journals have an English abstract and English contents of data tables and/or graphs available for each paper. This makes it quite convenient for English speaking readers to browse the key contents.

I call this paper "a (relatively) complete list of fungi in puerh" because it's a complete fungi survey on a broad range of puerh samples, sheng and shu both included, using the most thorough and reliable DNA analysis. It's only "relatively" complete because I guess it's just impossible to find all puerh colonizing fungi in one group of samples. However, as showed in some of the data, the fungi found here are quite representative.

Before going over the contents, one thing to emphasize is, this journal article is about fungi found in normal, healthy puerh products, and NOT rotten or moldy puerh. So none of the fungi discussed here is a "mold". But it also depends on what the definition of "mold" is. Since "mold" is more of a daily-life word rather than a scientific word, there is no clear definition of it and people just use it rather randomly. I've found it's quite common that when people discuss on "mold" in puerh, they don't have the same idea of "mold" in their minds (Here is a recent example of such discussion from teachat). Sometimes, discrepancies are simply from that people are not talking about the same thing while they think they are talking about the same thing. Roughly, my definition of "mold" is the spore producing stage of fungi featured with hairy structures visible to naked eyes and sometimes spores visible to naked eyes. For puerh products, sometimes people would also call large visible clumps of fungal colonies (even when they are not actively producing spores) "mold". The fungi discussed in this journal paper doesn't include this situation either. So by the above definition of "mold", this paper is not about mold in puerh, but about "normal" fungi in puerh.

Here is a snapshot of the abstract. (All following pictures can be clicked to enlarge.)

To make it short, a survey on 60 puerh (sheng and shu) samples led to identification of fungi of 40 species of 19 genera; half of the species are from Aspergillus and Penicillium (these are genera names that must sound familiar to many of you). By amount of growth, yeasts and Aspergillus fungi are most commonly found.

Below is Table 1 of the paper, with a complete list of fungi identified. Take a look before reading on... Found anything interesting? 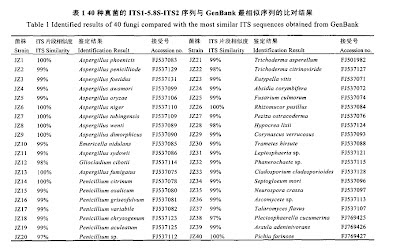 To me, what's interesting from the above table is:

1. You can spot a few species that are commonly deemed as "bad guys". For example, the notorious Aspergillus niger. This guy is commonly found in normal healthy puerh, as reported by many puerh studies. But it's rather unclear if it has a significant impact on the health outcome of puerh. But when we talk about this guy in normal healthy puerh, it's NOT in its "mold" form. In most other discussions on various human diseases caused by A. niger, we usually see images like this, which is NOT what A. niger appears like in normal puerh:

Many fungi produce their toxins during sporulation (active spore-producing stage), which is really a reasonable stage for them to produce toxins as special protection mechanisms for their reproduction. So A. niger identified in normal puerh product is not likely to be very toxic. However, more research is needed to see if it's harmful or not, or if it's like the nitrite in kimchee or sauerkraut, something you don't want to have too much, but some price you would like to pay in order to enjoy kimchee and sauerkraut.

2. More thoughts about toxins. Potato buds are toxic to human body, but potato is perfectly palatable. Certain types of string beans are slightly toxic when not fully cooked, but when fully cooked, they are nutritious. Many edible mushrooms are only edible and non-toxic before their sporulation stage (for example, the puff balls). Very often, it's not a clear cut what's toxic, and what's not. Fungi are some of the most complicated species. It probably requires a lot of research to find out the health outcomes of puerh colonizing fungi. But obviously many people wouldn't wait for all research results to drink puerh :-)

3.  Despite some bad guys seen in the above table, we don't see Aspergillus flavus, may I call it the devil king of fungi? Aspergillus flavus is a fungus found in a lot of rotten crops, and typically in rotten peanuts. It produces a series of toxins that are among the worst of fungal toxins, causing diseases ranging from instant toxic shock to cancers. That's pretty much why many experienced puerh drinkers would tell people to stay extremely cautious about any yellow molds on puerh, which are indeed very dangerous. (However I would like to mention here that the Aspergillus flavus yellow molds are quite different from "golden flowers" in Fu brick, and it's not hard to distinguish them by naked eyes.)

Overall, I thought this is an interesting reading for both scientists and puerh drinkers. This also makes me think that it would be interesting to explore on the following:

1. Co-existence and co-exclusion of fungal species. But I can imagine it will take a lot more sample analyses and cost a lot of money. So unless it can reveal some "useful" information (such as whether puerh made in certain way is less likely to develop mold during storage), probably nobody would sponsor the study just to satisfy curiosity.

2. Species in sheng stored in different conditions. This research was done by Southwestern University in Chongqing, China. Those guys, I assume, deal with dry stored puerh primarily. It would be interesting to compare dry stored and wet stored sheng, and/or compare sheng of various ages, for their fungal colonization.

If you are interested in fungi in puerh, you may also want to read this article on chadao, a blog with not only many beautifully written articles but also a lot of evidence-based scientific discussions on tea. (But who knows exactly what happened to this blog site, as it has been inactive for over a year?)

This 2008 article doesn't seem as rigorous research as the Zhao eta al. article in Journal of Tea Science, but it provides some very nice photos of fungi. It also confirms that Aspergillus niger is commonly found in normal puerh products. The study has the potential to answer my above-mentioned 2nd question, but the authors didn't seem to give much discussion on it. But the link I've got for this article is short of the last page of the article, so I don't know if I've missed some important discussion there.

At the end, I also want to mention that, the last author of this Zhao et al. Journal of Tea Science paper (and supposedly the correspondence author and Principle Investigator of the study), Liu Qinjin, is one of the leading puerh scientists and a tea scientist overall. His book about puerh, Appreciation and Brewing of Puerh, is my favorite puerh book.

In China, there have been many puerh books published in recent years. But the world of puerh is always full of myths and urban legends. This book, as small and plain-looking as it is, is closely based on facts and gives a nice review of basics of puerh including history, culture, cultivation and production.
at 7:47 PM

Thanks a lot for this article, it's so interesting to study Pu-erh tea from a scientific perspective.

On table 2, how would you explain the huge difference in total number of fungi between first grade ripe Pu-erh and second and third grade?

Do you think there could be a relation between the color and turbidity of the liquor and the total number of fungi?

William, I don't think the second table can give much information about the differences between different types of teas. Although there are some differences, there are not many samples to begin with, and the reported numbers are only average numbers. So we don't know, for example, the range of amount of certain fungi in all samples of a type of tea.

The paper does mention that lower grade leaves tend to have more fungi than higher grade ones.

Lew, pretty much as you said. Caffeine is also a defensing product made by plants, just that it doesn't kill us and we happen to like it :-D

I updated the link of the paper and it seems to work now.